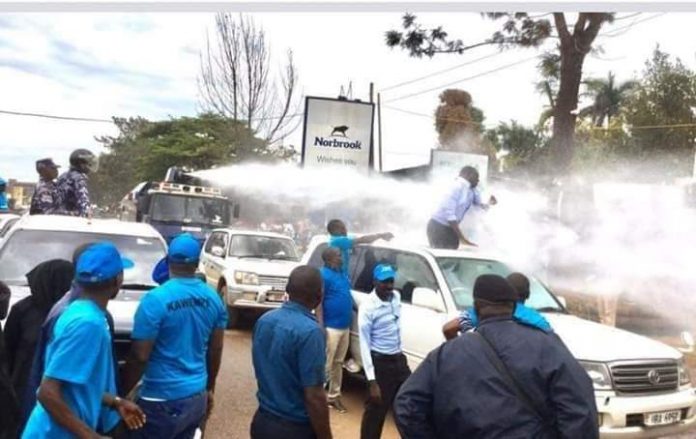 In a statement issued on Monday afternoon, Kampala Metropolitan Police Spokesperson SP Patrick Onyango said “FDC informed us about the intended celebration and we wrote back to them advising that they should shift the venue but they ignored our directives.”


Onyango added “Besigye defied orders and parked his vehicle in the middle of the road, blocking and inconveniencing other road users.”
However, it is said, when Police blocked their rally, some FDC party supporters on foot and vehicles soldiered on attracting crowds, which prompted police to use tear gas, water cannon and live bullets to disperse them.
This resulted into running battles between police and the FDC party members whose numbers kept growing.

To contain the situation, police tried to arrest the leaders of the procession including Kira Municipality Member of Parliament; Ibrahim Ssemujju Nganda, but he disappeared. Dr Kizza Besigye, continued waving to the crowd from his vehicle, forcing Police to block his car with the help of about six police patrol trucks
Police later used a water cannon to force Besigye out of his car. They later managed to force him out of the vehicle and bundled him into a police van


The KMP spokesperson says Besigye’s car was towed away and he was taken to Naggalama Police Station
The angered the FDC party members who decided to march in a procession from Mandela national stadium to their party headquarters in Najanankumbi were intercepted by police that tried to disperse their procession on the busy Kampala-Jinja highway.


What followed was Teargas and live bullets rocked Kireka and Nakawa as police took on FDC supporters
Meanwhile Onyango denied reports that one person was shot dead in the running battles. ‘‘There is a photograph circulating on social media purporting that a woman was shot and killed today in Kireka Trading Centre. This is not true. No death has been registered in this operation.’’ he said.

I was released from Naggalama Police cells at about 10pm last night. By God’s Grace, I am generally fine. Am grateful for the many msgs of concern &prayers.
Gross abuse of Human Rights (by NRM/M7 junta) with impunity has gone on for too long.
We must all unite in saying: ENOUGH! pic.twitter.com/VPMQSr0KKc