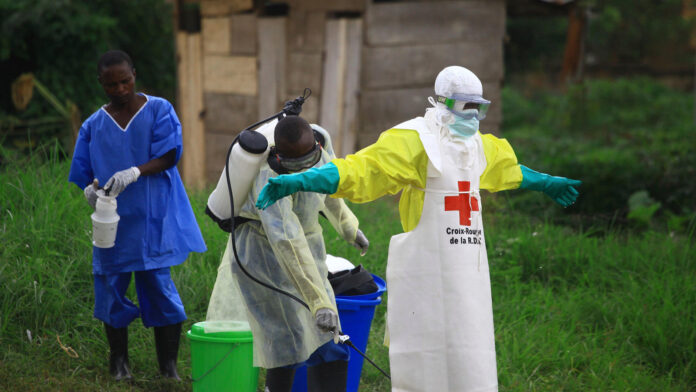 World Health Organization has upgraded Uganda’s Ebola risk situation from ‘high’ to ‘very high’, and from ‘low’ to ‘high’ at the regional level since the virus was first detected in late September. However, WHO determined the risk remained low at the global level.
The latest WHO figures put the number of confirmed and suspected cases of Ebola in Uganda at 158, including 54 confirmed deaths and 21 probable deaths. This brings the case fatality rate up to nearly 40%.
Janet Diaz, head of the WHO’s program for clinical management in health emergencies, recently returned from a week-long visit to Uganda to take stock of the current situation and assess the needs of health facilities in affected areas
WHO reports three vaccine candidates have been identified that could be tested in randomized clinical trials in Uganda. No starting date has been set
The districts with confirmed cases include; Bunyangabu (1 case), Jinja (1), Kagadi (1), Kampala (17), Kassanda (46), Kyegegwa (4), Masaka (1), Mubende (63) and Wakiso (3).


On 26 October, six children from three different schools in Kampala tested positive for Ebola. They were all contacts of the confirmed case. Their classmates and teachers were quarantined and monitored. The authorities reached out to all the teachers and parents in the school to sensitize them on the need to comply with preventive measures.
An Ebola case was over the week confirmed in Jinja in eastern Uganda, health minister said on Sunday, the first time the outbreak has spread to a new region of the country from central Uganda where cases have been confined so far.
In a tweet, health minister Jane Ruth Aceng said the case in Jinja was of a 45-year-old man who died on Thursday. A sample that turned positive for Ebola had been obtained from the body by health workers at a private clinic where he had sought treatment.


The virus circulating in Uganda is the Sudan strain of Ebola, for which there is no proven vaccine, unlike the more common Zaire strain that spread during recent outbreaks in neighbouring Democratic Republic of Congo.
Ebola generally kills about half of the people it infects.