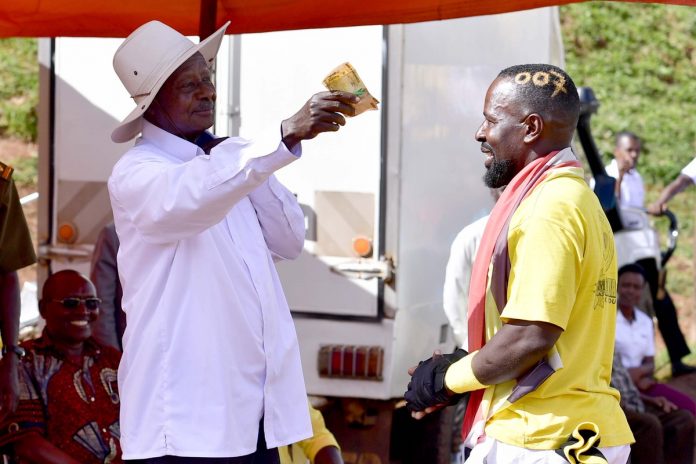 Self-styled “commander of the Ghetto army” Elijah Nsubuga on Saturday gifted President Yoweri Museveni with Ugx 100, 000 in cash for his ‘ ‘ future expenses’’


‘‘While officiating at the launch of the NRM Youth Camp Headquarters at Kibuye in Kampala, my son Elijah Nsubuga, commonly referred to as Ghetto Commander gifted me with Ugx. 100,000 as his personal contribution towards any of my future expenses.’’ The president said.

During his speech, Ghetto Commander , expressed his disappointment with those who say that ghetto people are poor. “Mr. President, I would like to challenge those who claim that we, the ghetto people, don’t have money. As the commander of the ghetto army, I am giving you this 100, 000 for your campaigns,” he said.


The Ghetto commander also asked the congregation to raise their hands and pray for the President and his family and for all those who don’t believe in his leadership, for God to help them get a change of heart.