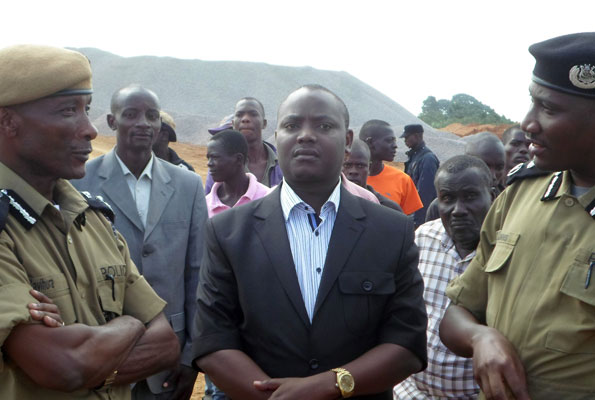 Government officials have joined Ugandans to condemn the actions of Minister of state for Water resources, Hon. Ronald Kibuule.

Last week, the minister reportedly beat up a female security guard attached to Stanbic Bank Mukono branch after the guard refused him to access the bank premises without being checked.

‘‘Security guards do a noble vocation, and as such nobody should look down upon them. We must, at all times exercise respect and humility.’’

His tweet was liked by Hon. Frank Tumwebaze, the current minister for ICT and Information.

When the guard stood her ground and refused him to enter without being checked, Mr. Kibuule reportedly grabbed, beat her up before flinging her away.

Former Minister Asuman Kiyingi posted on his Facebook page: Why would I molest a security officer for checking me? I have gone through this ritual numberless times whenever going for Cabinet, meetings at State House, entering banks or other public places. Arrogance and pride makes us artificial and detestable. Humility makes us real and acceptable.

“I have decided to close my Stanbic bank account for that action. And all my associates I advise you to do the same. I have seen Museveni checked at a church service who is the minister? Everyone must be checked.”

“Slapping a poor woman on duty is unacceptable and subsequent apology is by Stanbic bank it’s double standards. I have moved and seen many cabinet ministers including First Family who allow to be checked and at times drive in traffic jam without causing unnecessary commotion case.’’

Some of the popular reactions on twitter:
Isaac Munanira ‏@imunanira @stanbicug are all complaints replied to by the Stanbic Ceo? Or was the complaint addressed to him specifically? What was the complaint?

@CMasanso @stanbicug this is an epic FAIL. It’s 2016 and you are condoning assault. You are not Moving Forward. You are rewarding crime.

Fresh Prince_Kabale ‏@Eric_ @stanbicug the security guy should sue guys thou and seek remedies for unfair treatment after and during the incident, protection etc

‏@irenesconcierge @stanbicug you should stand for the rights of your employees against tyranny. You score low on women,human rights in business

Edgar kaahwa ‏@EdgarKaahwa @stanbicug Ugandans should start punishing companies that side with oppressors! They realy take us forgranted!

cmasanso ‏@CMasanso @stanbicug @StandardBankZA is this the new standard? That suppliers bear the brunt of your obsequious stand? Assault shouldn’t be condoned.

How Patrick Bitature got onto the distressed company’s list