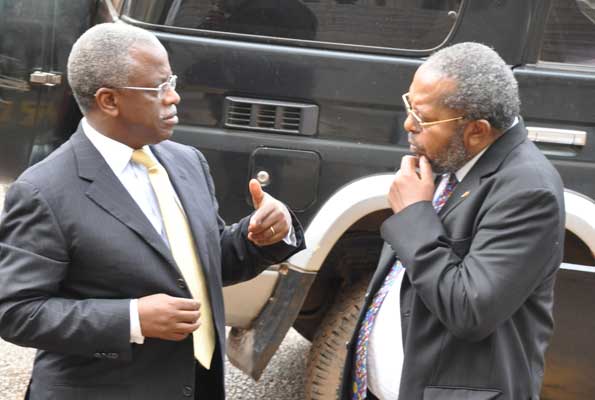 Looks like Crane Bank wows are not about to end. As the regulator struggles to put the once mighty bank back on the road as well as secure a buyer, another hurdle has emerged.

It turns out the National Bank of Commerce (NBC)  issues were not properly resolved-at least according to the bank’s shareholders. In September 2012, NBC owned by among others former Prime Minister Amama Mbabazi, Amos Nzeeyi and Ruhakana Rugunda was taken over by Bank of Uganda. It was later sold to Crane Bank. Before its closure, the bank was in the news for mismanagement and battling recapitalization.

However, the owners of NBC were not satisfied with how their bank was handled.

They reportedly went to court and secured a court injunction blocking Crane Bank taking over their bank. Reports indicate the court order was ignored. NBC was formed in 1991, and was named Kigezi Bank of Commerce, with a mission to provide banking services and inexpensive loans to the Kigezi Community.

The shareholders went ahead to register their case with the constitutional court. However, given the prevailing circumstances (general elections) and a backlog of court cases, the court case-NBC vs BoU and Crane Bank was never heard.

Unfortunately, before, the Court would hear the case; Crane Bank was on 20th October 2016 taken over by the Central bank.

Newz Post, understands NBC shareholders have since managed to secure a court injunction blocking Bank of Uganda from selling Crane Bank [a bank that swallowed their bank] before the court hears and resolves the closure and sale of their bank to Crane Bank. They urge that unlike Crane Bank, which was given six months to look for capital to inject in their bank, such an opportunity was never given to them.

More than three investors have in the past expressed interest in buying Crane Bank only to disappear in thin air thanks to among others the Bank’s huge Nonperforming loans which arose due to over valuation of properties.

Why Crane Bank is a hard sell

Unconfirmed reports indicate, after trying hard to secure their bank from a potential takeover by the Central Bank, the Crane Bank shareholders reportedly moved their money to two little known local banks [names withheld for now]

They are said to have alerted their close friends of the imminent takeover by the Central bank. Crane Bank was on October 20 taken over by BoU after it had fallen short of capital requirement stipulated in the Financial Institutions Act 2004 (Amended in 2016).

The friends reportedly moved fast to secure their money. According to analysts, these actions raise questions as to whether the Crane Bank shareholders are still interested in their bank.

Reports indicate, customers have continued to withdraw their money despite assurance from BoU that Crane bank is in safe hands.

Sources say, as of Tuesday, 2nd November 2016, Crane Bank Customers had withdrawn up to one trillion shillings. With negligible deposits, the Crane bank liquidity is said to be is worsening.

Sources say, the recent announcement that government/ BoU was pumping in capital in Crane Bank was prompted by this massive withdraw of deposits by the bank customers.

According to the Daily Monitor, the decision to inject the estimated Ugx. 200b in Crane Bank came after Cabinet ministers warned the collapse of Crane Bank posed a risk to the country’s financial sector and insisted that something should be done to avert the crisis.

Sources say BoU has in the past few weeks been begging government institutions to give life to Crane bank by giving the bank more deposits, however, these institutions are yet to respond.

With more customers abandoning the bank [as early as January 2016, Crane Bank had started experiencing a massive customer exodus-[read dormant accounts], with reports that the buildings housing Crane Bank belong to Meera Investments-not Crane bank, add to the fact that the Bank’s image is already tainted [ by BoU takeover] it remains to be seen whether BoU will easily get an investor/ buyer-otherwise what are you buying? customer, Goodwill, Assets or branches?

He added: the president’s later mentioned this in public. This was an indirect marketing for Crane Bank. It is little wonder, Ugandans responded by banking with Crane Bank, making it the fourth largest bank in the country.

Responding to a question by journalists, on whether there are plans by the government to bail out constrained Crane bank, President Museveni said:

Analysts say, this was a strong signal for a bank the president praised a few years ago.

The BoU governor Tumusiime Mutebile, recently said that BoU has in the past successfully been able to secure investors for the banks they have taken over including Global Trust Bank, NBC, Nile Bank, Greenland Bank among others, saying BoU will also get a buyer for Crane Bank as well.

Like we have pointed out, the Crane Bank case may be a unique one and therefore a hard sell for now.