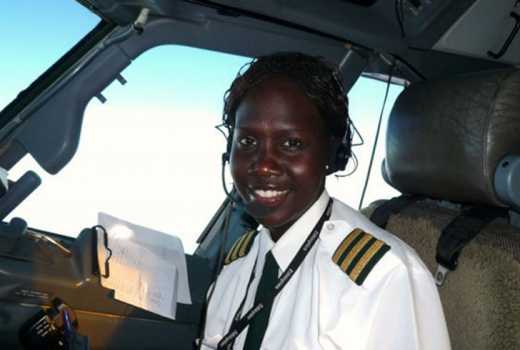 Some have described the world’s youngest country as forgotten country. Even then, there some good things happening in the war torn country, poverty, famine stricken country.


The first South Sudanese pilot, Captain Aluel James Bol is on a history making spree after she became a pilot at Delta Airlines, a leading global airline company.
Captain Aluel first made history in 2011 when she graduated as the first female pilot in the whole of Sudan.
“I feel extremely delighted especially at the mere thought of achieving my dream. As a child growing up, I always wanted to be a pilot and my late dad made sure that he did all what it takes to make me succeed,” said the 34-year old, from Lakes State at a State reception held in her honour.

The daughter of the late Justice James Bol worked with Ethiopian Airlines after graduation and later Fly Dubai where she was a first class pilot.
The 34 year old first made news in 2011 when she completed her aviation training in the United States, with support from the South Sudan government.


Aluenge flew for Ethiopian Airlines, and Fly Dubai. Seven years ago when she finished from flying school she said, “I feel extremely delighted especially at the mere thought of achieving my dream. As a child growing up, I always wanted to be a pilot and my late dad made sure that he did all what it takes to make me succeed.”
Congratulatory messages have been pouring in from many proud South Sudanese and Aluenge’s family members. Responding to a congratulatory message on the appointment, Aluenge wrote on Twitter: “Thank you sister For your support. I am greatly humbled. To God be the glory @modernemeid”


Aluenge had once tried to be a model when she was 16, both in New York and London. Her fashion ambition however didn’t work out. She was at the Florida Memorial University where she majored in international business management before switching to aeronautical science. In a year she got her commercial pilot’s license.
With the recent news of more countries on the continent opening up their air space, a move that would see cheaper airfares between African countries, we certainly hope more opportunities will arise particularly for talented African women aviators.