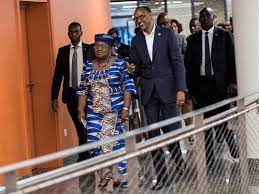 Africa is working with the European Union and other partners to help create regional vaccine manufacturing hubs in South Africa, Senegal and Rwanda, and Nigeria, World Trade Organization Director-General Ngozi Okonjo-Iweala said.
“We have now seen that over-centralization of vaccine production capacity is incompatible with equitable access in a crisis situation,” Okonjo-Iweala said on Monday during a virtual meeting- Reuters reported
“Regional production hubs, in tandem with open supply chains, offer a more promising path to preparedness for future health crisis.” The WTO boss said


President Paul Kagame also confirmed the news during the Qatar Economic Forum on Monday
Mr. kagame said: ‘‘Africa is in talks with investors to start the production of coronavirus vaccines in Africa’’
Africa was “trying to find partners, to start manufacturing vaccines on our continent,” Kagame said
“We are discussing with people who will help with financing and I think in a few months we should hear a different story,” Kagame said, without giving details

The continent of 1.3 billion people has fully vaccinated about 12 million people against COVID-19.
Kagame suggested that a Eurobond was one option to help pay for the creation of vaccine manufacturers in Africa.
“Rwanda has been having a very good B+ credit rating. The Eurobond is one good option that will provide us with resources we are looking for,” he said.
The World Health Organization reports the number of African COVID-19 cases has exceeded 5 million and killed over 130,000.


WHO regional director for Africa Matshidiso Moeti says covid-19 cases have been increasing over the past four weeks. She says new cases in the past week have risen by nearly 30% across the continent and deaths have increased by 15%.
She says five countries—South Africa, Tunisia, Zambia, Uganda, and Namibia—account for 76% of new coronavirus infections in Africa.


“Africa is in the midst of a full-blown third wave. The sobering trajectory of surging cases should rouse everyone to urgent action,”
She says the Delta variant, the most virulent strain, has been reported in 14 African countries, and the Beta and Alpha variants have been found in more than 25 countries.