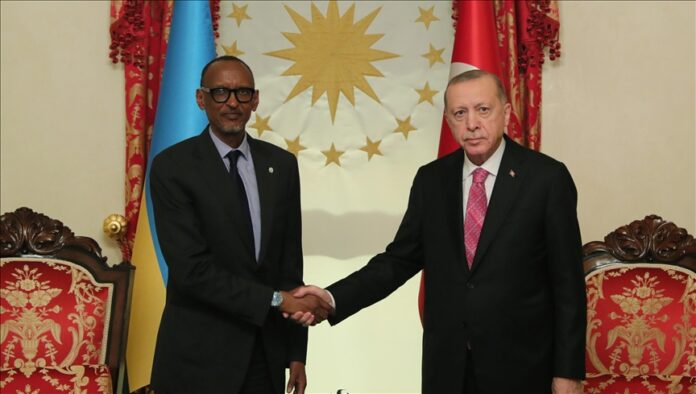 Turkish foreign minister Mevlut Cavusoglu is set to visit Rwanda on Thursday, January 12, as part of a 5-nation Africa tour that starts on Sunday, January 8. According to a statement by the Turkish Ministry of Foreign Affairs, Çavuşoğlu’s tour will start in South Africa, before he continues to Zimbabwe, Rwanda, Gabon and Sao Tome and Principe between January 8 to 14.

For many years, Ankara has been an important player in the Libyan civil war, backing one of the primary belligerents. But Turkish influence extends far further across the African continent, in keeping with a strategy developed in the 1990s and adopted by Recep Tayyip Erdogan when he came power in 2003


‘’All aspects of our bilateral relations will be elaborated with the aforementioned countries, and regional developments as well as Türkiye’s Africa Partnership Policy will be reviewed during the visit of Minister Çavuşoğlu.’’ The statement reads In part.
In recent years, Ankara has turned Turkish defense industry products into an essential source of income for the Turkish economy. The successful use of the Bayraktar-TB2 UAVs in Syria, Libya, Nagorno Karabakh, and Ukraine has increased the popularity of Turkish defense products.
In 2020, Turkish defense and aviation exports to Africa stood at $82.9m. In 2021 this figure reached $460.6m. In 2021, during his Africa tour, Turkish President Erdoğan’s noted the great African demand for Turkish UAVs.
Today, African nations such as Djibouti, Somalia, Libya, Niger, Morocco, Togo, and Ethiopia have become customers of the Turkish Bayraktar TB-2s. The immediate results of Ethiopia’s efficient usage of the Bayraktars against the Tigray separatists in 2021 have turned this product into a hit. Addis Ababa has received six Bayraktars and will soon receive 13 more. Compared with the American and Israeli products, the lower price of the Bayraktars and Turkey’s indifference to weapons usage turn Ankara into a more attractive supplier.
In addition to the UAVs, the Turkish defense industry provides the continent with armored vehicles, navy equipment, and infantry rifles. Turkey provides these goods to the Sahel region countries, i.e., Burkina Faso, Chad, Mali, Mauritania, Nigeria, and Niger.

Turkey’s penetration into Africa cannot be explained solely by pure altruism. As a sovereign state driven by Neo-Ottomanism, Turkey seeks to become once again a world power as it was in the Ottoman times. Ankara also seeks to acquire access to energy sources of the African horn. To safeguard its investments, Turkey under Erdoğan did not hesitate to inaugurate its biggest army base in Somalia and run that country’s strategic gateways to the world.
While undertaking all these actions, Turkey also forms strong relations with the other African states, providing them with necessary military equipment at reasonable prices without compromising human rights. In other words, Turkey behaves like a traditional Turkish merchant at Istanbul’s Grand Bazaar, who seeks to please his client to turn him into its loyal customer. So far, the Turkish strategy of mixing soft power measures with military exports has paid off. In the meantime, as the immediate beneficiary of this relationship in the short run, the African states are only too glad to cooperate with Ankara while strengthening Turkey vis-à-vis its rivals such as France, especially in the UN and the African Union.
[State institutions like the Directorate of Religious Affairs, known as] the Diyanet, help Turkey increase its influence through religion by constructing mosques. In doing so, Turkey challenges Saudi Arabia and Iran, especially in Ghana, Burkina Faso, Mali, and Chad. A concrete example of this policy could be seen in Djibouti. The Diyanet finalized the construction of the Ottoman-style Abdülhamit II mosque in 2019, but this impressive mosque cannot overshadow the Turkish-built Nizamiye mosque in Somalia. The mosque was crowned as the biggest in East Africa. In addition to constructing its own style of mosques, Turkey also launched restoration projects for repairing Somali mosques.

According to the 2021 Africa Report, Turkey has become, with 15% support, the eighth most-popular non-African country after France. This figure is raising concerns, especially in Paris – once considered to have the most substantial influence in the African continent. On November 7, French President Emmanuel Macron accused Turkey – together with China and Russia – of acting as an imperialist and colonialist state in Africa.