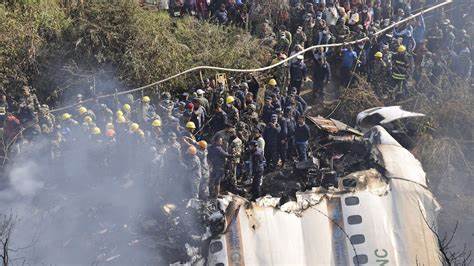 Authorities in Nepal said 68 people have been confirmed dead after a regional passenger plane with 72 aboard crashed into a gorge while landing at a newly opened airport in the resort town of Pokhara. It’s the country’s deadliest airplane accident in three decades.
The country’s Civil Aviation Authority posted the announcement to Twitter Sunday.
At the crash site, rescuers used ropes to pull out bodies from the wreckage, parts of which were hanging over the edge of the gorge. Some bodies, burned beyond recognition, were carried by firefighters to hospitals, where grief-stricken relatives had assembled.
It was not immediately clear what caused the plane to crash.
A witness to the crash said he saw the aircraft spinning violently in the air after it began to attempt a landing, watching from the terrace of his house. Gaurav Gurung said the plane fell nose-first towards its left and then crashed into the gorge.
“The plane caught fire after the crash. There was smoke everywhere,” Gurung said.
The aviation authority said the aircraft last made contact with the airport from near Seti Gorge at 10:50 a.m. before crashing.