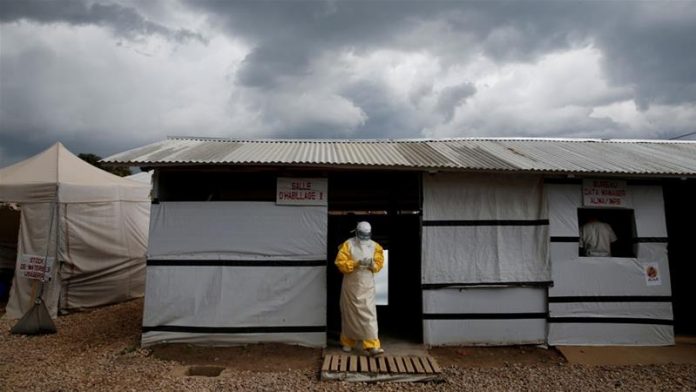 A five-year-old boy has tested positive for Ebola in Uganda, the first cross-border case since an outbreak began in neighbouring Democratic Republic of Congo last year, the World Health Organization (WHO) has announced.


Health Minister Dr Jane Ruth Aceng told journalists in Kampala that an Ebola patient is being treated at Bwera Ebola Treatment Unit. This is the first case since an outbreak in neighbouring Democratic Republic of Congo close to a year ago.


Ebola virus disease is a severe illness that is spread through contact with the body fluids such as vomit, blood and faeces of a person sick with the disease. The symptoms can be sudden and include fever, fatigue, muscle pain, headache, sore threat.
“The confirmed case is a 5-year-old Congolese child who traveled from the DRC with his family on 9th June 2019. The child and his family entered the country through Bwera Border post and sought medical care,” Aceng said in a press conference at 9:00pm on Tuesday.

The boy’s mother is of Congolese origin but got married to a Ugandan husband and settled in Uganda’s western district of Kasese. The mother and the son returned to Uganda through Bwera border post on June 10 together with four other family members of Congolese origin.
According to Aceng, the family sought for medical care for the boy at Kagando hospital where health workers identified Ebola as a possible cause of illness after he presented symptoms of vomiting blood, bloody diarrhea, muscle pain, headache, fatigue and abdominal pain.


Aceng says Ugandan health officials were alerted of the presence of contacts of an Ebola case from DRC and their phone contacts provided for close monitoring by their counterparts across the border.

I commend @MinofHealthUG for responding quickly to the identification of a case of #Ebola. #Uganda has experience managing #Ebola and has been preparing for months for this eventuality. This kind of experience and preparedness is vital to prevent the further spread of the virus. pic.twitter.com/gGmzYG8T8M

All the other Congolese family members have since been isolated at Bwera Ebola Treatment Unit and two of them had their blood samples taken and sent to the Uganda Virus Institute (UVRI) after they too developed symptoms similar to that of Ebola. In total eight contacts have been identified and are under close monitoring.


Aceng assured the public that Uganda has been prepared to tackle the virus
Uganda has been on high alert since the outbreak in the eastern DRC, where more than 2,000 cases of the highly contagious virus have been recorded, two-thirds of which have been fatal.

@MinofHealthUG, @WHOUganda and @CDCemergency will begin ring vaccination against Ebola of contacts of the case and frontline health and other workers on Friday 14th June 2019. pic.twitter.com/NGG2096pvC