Home Regional Commemoration of the Genocide is a powerful weapon in fighting against genocide... 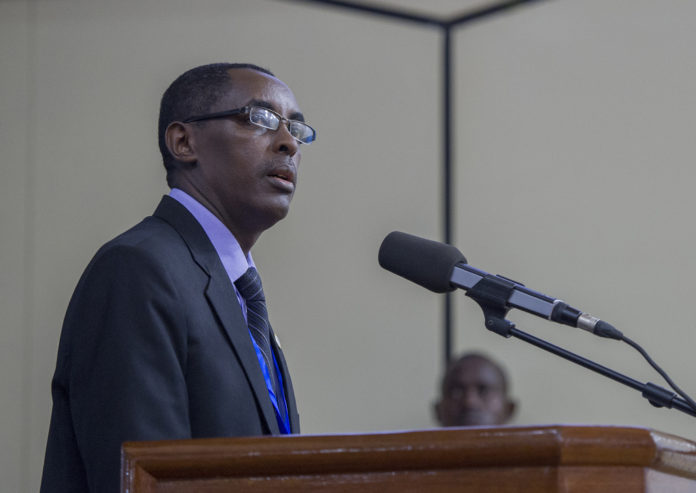 During a dialogue with the Kicukiro District’s Reconciliation Forum on Sunday 21st January 2018, the Executive Secretary of the National Commission for the Fight against Genocide (CNLG), Dr Jean-Damascène Bizimana explained that commemoration of the Genocide against the Tutsi was a powerful weapon in fighting against genocide ideology.


He said “for us to eradicate the genocide ideology we need first of all to accept that it is still there, though it reduces as times pass. We don’t have to escape it. We instead have, everyone in their live, to analyze how it is manifested in our respective area before thinking about the whole country at large; and we need to be brave enough to talk about it since there are some authorities of grass root administrative entities who pretend to mediate those who exhibit genocide ideology with its victims so that this cannot be recorded by the police and tarnish the entity’s image.

This is a kind of sidestepping with the problem, which cannot solve it. Genocide ideology is not an ordinary act. It is a serious crime even though there are some of us who do not understand its cruelty so that we can fight against it with its nastiness. Sidestepping the problem does not bring any solution. What can instead bring the solution is to keenly analyze it in areas where we live. Thus, commemoration of the Genocide, remembering those killed just for how they were created is the powerful weapon to fight against it”.


He said that “numbers from Gacaca Courts comprise a good indicator of genocide ideology and its cruelty. These numbers show that the Gacaca Courts handled 1,951388 cases and 1,678672 people were convicted of crimes of Genocide. This reveals the spitefulness of genocide ideology since it was upheld until it was instilled into all of those persons. It is not a simple and easy way to go to uproot it. If you compare these numbers with the number of the then adult individuals that was standing at 3,400,000 you will realize that more than a half of adult people by then, were involved in the Genocide. This clearly explain the task we have”.


Fidèle Ndayisaba, Executive Secretary of the National Unity and Reconciliation Commission (NURC) said that leadership at any level must play a pivotal role in fighting against genocide ideology to promote unity and reconciliation amongst Rwandans.
Senator, Prof. Chrysologue Karangwa, a member of the Kicukiro Reconciliation Forum said that it was necessary to explain the true history of the country to the youth to avoid that the youth could fall into the snares of those who distort the history to impinge on unity and reconciliation amongst Rwandans.


The Vice -Mayor for Social Affairs in the City of Kigali, Patricia Muhongerwa said genocide ideology should be fought from within families since, according to her, for any society to be strong, all start at family level.
“The fact that there are some of the youth who exhibit genocide ideology, explains the necessity for the role of us as parents since some of us are the ones to impart genocide ideology to them”.


The District Reconciliation Forum was initiated by the national Unity and Reconciliation Commission in collaboration with Unity Club and districts in 2017. The objective of the Forum is to promote the culture of peace, cooperation, unity and reconciliation in both leaders and other citizens in order to promote social cohesion and cooperation to enhance sustainable development.