Home Politics Bobi Wine to ‘Mr. Above’ ‘‘you are a brutal and cowardly dictator,... 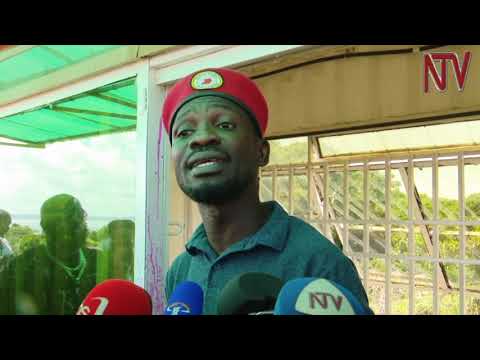 Police on Wednesday blocked Bobi Wine’s annual ‘yee sebo Busabala’ Boxing Day concert.
Rashid Agero, the Field Force Commander said that he was under instructions from his superiors to stop the concert because the organisers didn’t seek police clearance.


Bobi Wine would later take to social media to ‘warn’ Mr. Above.

‘ ‘Here is my message to him. Through these actions, you are revealing who you truly are- a brutal, cold and cowardly despot. You think you are hurting me and my dependents by blocking my sources of income, but you should know that the world is watching.’’ He said.

Police and the army yesterday blocked graduation ceremony of 65 students of Kasese Secondary School after it was suspected that #BobiWine was among the invited guests @SaltTelevision reports #Uganda pic.twitter.com/ZH8hZrYlup

‘ ‘Yes, I have done a show every 26th December for the last ten years, but if this is one of the many sacrifices I have to make for believing in justice and freedom, so be it! I will assure you once again that your intention to break my resolve through harassment and intimidation will certainly fail. I shall not kneel before you. I shall not be cowed by your acts of terror. The forces of evil may be so fearsome, but they never win in the end. One day, God being our help, you shall fall like all the other tyrants who came before you.’’

I have not performed for three months. Where have Ugandans been? Don't I have a family to feed – @BebeCoolUG responds to whether he feels sympathy for fellow artist @HEBobiwine over his blocked Busabala concert. #NTVNews https://t.co/p7NGaeEh6P pic.twitter.com/sQpzO77fqW