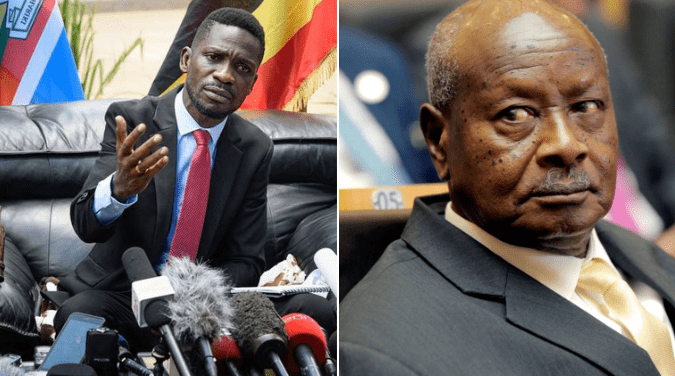 President Museveni recently said that even with foreign backers, opposition can’t win elections in Uganda.
He says even in the few places where they have ‘won’ they cheated the election results.


‘ ‘What the Opposition cannot kill, no matter how hard they and their foreign backers work, is the enduring love the population of Uganda have for the NRM Especially now, with the massive development and transformation taking place in the Country’’ the president said.
However, Bobi Wine says president Museveni is in panic model and weakening by the day.

There is little reason to think that the old system is collapsing. Rather the problem for president Museveni is that the number of those whose interests and identities it does not cater for is increasing.
This group includes younger voters. They have no memory of the war, have a relatively good education that has led them to want more than the agricultural livelihood of their parents, and stubbornly engage with politics on a national rather than local scale.


‘ ‘To know the cowardice of President Museveni and his desperacy to prevent our entry into Karamoja, a month back we were approached by one Judith Adyaaka, an FDC candidate for the just concluded election in Kaabong. The moment we agreed to support her and she took pictures with the Red Beret, she started receiving calls from the President’s office.’’ Bobi Wine said on Monday.
‘ ‘As you all know, she was promised several monetary and other favors by the regime. In exchange, she was asked to write to the Electoral Commission withdrawing her candidature, which she did!’’

The presidential hopeful claims president Museveni has ordered security forces not to allow People Power to enter in Karamoja sub region.
The Kyadondo East MP claims President Museveni has instructed Resident Disctirct Commissioners and other state operatives to stop the entry of People Power into Karamoja and other places
‘‘President Museveni government is using all manner of schemes to loot and plunder our nation in an unprecedented manner. For Karamoja, the situation there will leave anyone with a conscience in tears. Despite having huge amounts of mineral deposits and other resources, the people of Karamoja live in so much poverty.’’ Bobi Wine said


Quoting figures from UNFPA, Bobi wine said that Karamoja is now classified as one of the world’s poorest areas, with over 1.2 million people living in absolute poverty.
He explained that the levels of hunger and starvation are appalling! They have been impoverished. Mining firms controlled by those who govern us have taken over the entire area and fenced off large chunks of land.


‘‘Like all parts of Uganda, the people of Karamoja are yearning for and ready for change. Unfortunately, using the barrel of the gun, they have been subdued. Recently our team traveled through Karamoja, and they were amazed at the love they were receiving from the people. As soon as the area RDCs got to know, they quickly arrested our co-ordinators and placed them in detention.’’


Bobi Wine assured the people of Karamoja that come what may, they will visit the region.
‘‘To the people of Karamoja, we know that you are strong people who are in complete enslavement and fear. When we come, we shall have discussions about our country and its future.’’ Bobi wine remarked