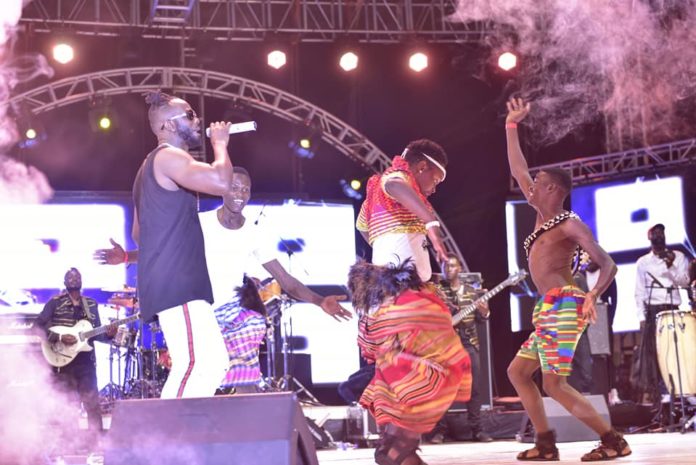 After what has been described by many as a highly successful music show at Kololo Airstrip, Gagamel Boss, Bebe Cool has dared his music rivals to host a show there.
After the show, Bebe Cool took to social media and posted ‘ ‘ To my family and fans, words cannot express the joy………this show -The Golden Heart concert is record breaking concert of all times in Uganda. I guarantee you even more recording breaking and historical events’’


He added: ‘Abo tebatusobola, batya nnyo!!’ Literally meaning –my rivals are no-match.
While Bebe Cool did not mention the musicians he claims are not his class, it’s a public secret- his music rivals are Bebe Cool and A-Pass.
Bebe Cool recently called for one on one debate with Bobi Wine. “I want a one on one debate of five hours with Bobi Wine, am waiting for that day in my life” Bebe Cool said.
A Pass and Bebe Cool have also been playing cat and mouse games for a while. Recently Bebe Cool took the beef a lot further when he bought a goat and named it A Pass.

Bebe Cool went on to state why: The Golden Heart concert was recording breaking and historical event
Kololo Airstrip: The golden heart concert was the first sold out successful show hosted by a local artist at this venue. It offered a new spacious environment for VIP show goers to enjoy themselves in a secure place, easily accessible and with ample parking space. I hope my fellow artists live up to this new challenge.
The Dome: This offered a new experience and ambiance for show goers. There was room for everyone to shake abit, slay the queen but also to interact with other show goers with ease.


Silk events: Despite the small power glitch (machines are machines), the stage setup, sound and lighting were phenomenon. Thanks to the silk events engineers supported by sound experts Mr Pholo Mpho from South Africa and Mr Julius Vicent Oyando from Kenya who turned the sound into the magical experience it was.


Security: While most of my fans anticipated trouble with security because of the President’s presence, all security personnel present at the venue exercised utmost professionalism by handling everyone that graced the function with dignity and respect. The SFC, Police, CMI, ISO and all partner organisations worked harmoniously together to ensure that everyone felt safe while enjoying themselves.
Bloggers and mainstream media: I am not surprised that the Golden Heart Concert was the most trending story online and on every media platform. No event or artist has been covered extensively before like the brand Bebe Cool and the Golden Heart Concert.


The Open bar: Despite the fact that fans paid a hefty amount to support the Golden Heart cause, this was the first local concert that fans have been treated to an open bar for all revelers.

The Golden Heart Concert returns in 2020