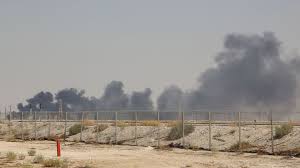 Oil prices surged more than 10 percent Monday after attacks on two Saudi Arabian plants that slashed output in the world’s top producer by half, with Donald Trump blaming Iran and raising the possibility of a military strike on the country.


West Texas Intermediate jumped 10.68 percent to USD60.71 and Brent climbed 11.77 percent to USD67.31 in early Asia trading following the blasts at facilities run by state-owned giant Aramco.
The attack by Tehran-backed Huthi rebels in neighbouring Yemen, where a Saudi-led coalition is bogged down in a five-year war, effectively shut down six percent of the global oil supply.

Brent soared almost 20 percent at one point on Monday, while WTI surged around 15 percent before paring the gains.
Trump said Sunday the US was “locked and loaded” to respond to the attack, while Secretary of State Mike Pompeo said: “The United States will work with our partners and allies to ensure that energy markets remain well supplied and Iran is held accountable for its aggression.”


Tehran denies the accusations but the news has revived fears of a conflict in the tinderbox Middle East after a series of attacks on oil tankers earlier this year that were also blamed on Iran.
“Tensions in the Middle East are rising quickly, meaning this story will continue to reverberate this week even after the knee-jerk panic in oil markets this morning,” said Jeffrey Halley, senior market analyst at OANDA.
//AFP