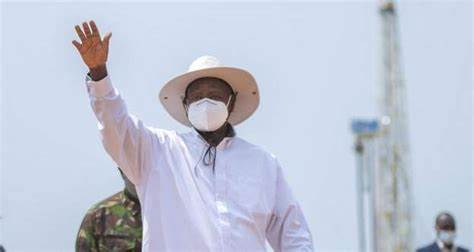 Uganda on Tuesday started the drilling of oil for commercial production in the Western Region district of Kikuube on the shores of Lake Albert.
President Yoweri Museveni launched the drilling process at the Kingfisher Oil Field, operated by the Chinese oil giant China National Offshore Oil Corporation (CNOOC).
Museveni thanked China for its continued cooperation with Africa, right from the time the continent was fighting colonialism. He stressed that China is cooperating with the continent in the economic sector to ensure mutual benefit.
The president said the country would carefully use the oil revenues for the development of the country. The government has previously said the revenues would be used for transport and energy infrastructure development.
Chinese Ambassador to Uganda Zhang Lizhong said the investment by the CNOOC in Ugandan oil fields is the largest investment by China in Uganda. Zhang was optimistic that the investment will contribute to the well-being of Ugandans.