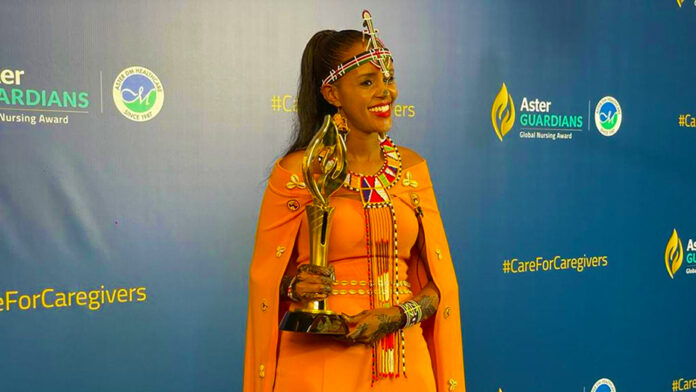 
A win for rural Africa
Fighting tears of joy after her name was announced by chairman and managing director of Aster DM Azad Moopen, Anna said, “I am happy and proud to have been given this tremendous honour. Growing up in a rural village in Kenya, never in my wildest dreams did I imagine I would be celebrated on a global platform such as the Aster Guardians Global Nursing Award.”
How was the winning nurse selected?
Anna was the chosen one among ten finalists selected from across the world, including the UAE. The nurses were chosen from over 24,000 applicants from 184 countries through a stringent review process run independently by Ernst & Young LLP, a screening jury and a grand jury.
All applications were evaluated to create a shortlist of 181, which underwent further review to put forward 41 top applications. The Grand Jury then reviewed the selected 41 applications to announce the top 10 finalists.
The winning nurse was judged on four primary areas – leadership, research and innovation, patient care, and society and community service.


As part of the celebrations, a group of 50 women healthcare professionals – called Naseej – performed a special fusion dance to celebrate the role of nurses.
Anna Qabale Duba was the first graduate from her village and the only educated child in her family. During her nursing studies, she won the Miss Tourism Kenya 2013.
She used her influence to advocate for gender equality and education in her community. Under the Qabale Duba Foundation, she built a school in her village where children could study in the morning and adults in the afternoon.

She chose education because she understood that illiteracy held people back from learning new things and changing harmful cultural norms.
Apart from learning to read and write, women at the school learned about the importance of antenatal care, skilled deliveries, and Sexual Reproductive Health & Rights.


These initiatives got recognition locally and internationally, including winning the Waislitz Global Citizen’s Choice award of $50,000 in 2019. Additionally, the results from this noble endeavour were quite evident. Female genital mutilations and early marriage had reduced tremendously.

The largely pastoral community opened up to women giving birth in hospitals. More mothers started sending their daughters to school.
Nurse Qabale made tangible transformations in her home community, across multiple dimensions of society. Now, the success of her actions is inspiring other people to follow suit.