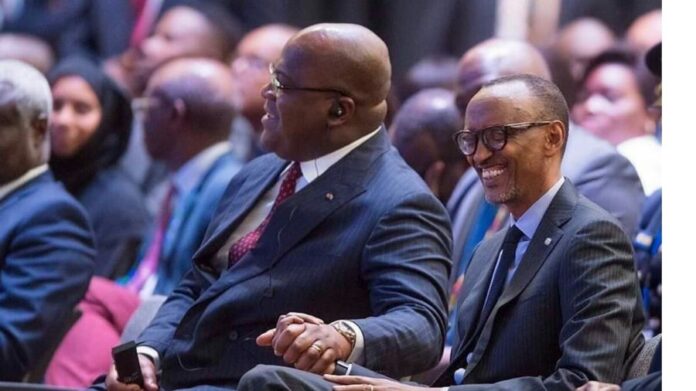 For the very first time, Felix Tshisekedi, president of the Democratic Republic of the Congo (DRC), broke the silence and publicly accused Rwandan’s support of rebels of the March 23 Movement (M23) on Sunday, amid the complicated diplomatic tug of war between the two countries.

From trading verbal blows to shutting down flights, the relations between Kinshasa and Kigali, which have seen signs of thawing under the current administrations, are now undergoing a diplomatic battle, provoked and fueled by the deemed M23 “terrorists”.


But besides all the tiffs and tit-for-tat, the two countries have also counted on regional mediation and possibly a tete-a-tete between the two presidents, attempting to bury the hatches and restore the fragile peace in eastern DRC, a conundrum haunting countries in the region far beyond Kinshasa and Kigali.

On Sunday, on the sideline of his visit to the neighboring Republic of the Congo, Tshisekedi claimed in front of the press that there was “no doubt” that Rwanda was backing a rebellion on the Congolese territory, breaking his silence in his first public remarks on the growing crisis between the two countries.
“I hope that Rwanda has learned this lesson, because, today, it’s clear, there is no doubt, Rwanda has supported the M23 to come and attack the DRC,” he said.


Tensions between the two neighboring countries intensified in May after DRC accused Rwanda of supporting M23 rebels in DRC’s northeastern North Kivu province, bordering Rwanda, in renewed fighting that has displaced more than 117,000 people in DRC’s Rutshuru and Nyiragongo territories inside the province.

Mostly made up of former rebels of the National Congress for the Defense of the People (CNDP), the M23 briefly seized Goma, capital of the North Kivu, in late 2012 before being “defeated” the following year, according to Kinshasa. Since late 2021, M23 has resumed fighting with the army in the region.

It is already an open secret that Kinshasa has been upset about Kigali’s alleged support of M23, but Tshisekedi has been cautious not to mention Rwanda by name.

But the diplomatic tug of war has officially broken out, ever since DRC’s Minister of Foreign Affairs Christophe Lutundula publicly accused Rwanda of being behind M23 rebel attacks against DRC on May 25, at the meeting of the African Union (AU) Executive Council held in Malabo, Equatorial Guinea.

“I say clearly, that the M23 supported by Rwanda has attacked MONUSCO (United Nations Stabilization Mission in the DRC) international troops. We cannot remain indifferent. We cannot remain without saying anything,” said Lutundula at the AU meeting.


Later on May 27, other than classifying the M23 as a terrorist group, Kinshasa announced the suspension of all flights of RwandAir, the flag carrier airline of Rwanda, to the DRC soil after a national security meeting chaired by Tshisekedi, based on evidence that the M23 is supported by the Rwandan army.

Kigali, while denying all allegations of backing M23, also accused the Congolese army of supporting remnants of Democratic Forces for the Liberation of Rwanda (FDLR), responsible for the 1994 genocide. Since the tragedy in 1994, the relations between the two countries have been strained, as Rwandan Hutus accused of slaughtering Tutsis during the 1994 Rwanda genocide arrived in eastern DRC.

However, the complicated relations have been on the mend after Tshisekedi took office in 2019, who signed three agreements on bilateral cooperation with his Rwandan counterpart Paul Kagame in Goma, once occupied by the M23 rebels in 2012.

But besides all the tiffs, the two countries have also counted on regional mediation and possibly an in-person tete-a-tete between the two Presidents, attempting to end the feud and restore the fragile peace in eastern DRC, a conundrum haunting beyond Kinshasa and Kigali.

Senegalese President Macky Sall, who chairs the African Union, called on May 29 for dialogue between the countries and urged Angolan President Joao Lourenco, also the chairperson of the International Conference for the Great Lakes Region (ICGLR), to head peace talks between DRC and Rwanda.

Soon on June 1, Tshisekedi made a blitz visit to Luanda for a meeting with Lourenco, during which the two “discussed various aspects that may contribute to the peaceful resolution of their dispute”, reads a statement by the Angolan presidency.

The meeting bore fruit as Tshisekedi, “at the request of his Angolan counterpart”, agreed to release two Rwandan soldiers captured recently in DRC.

Following the meeting with the DRC leader, Lourenco also held a virtual “conversation” with Rwandan President Paul Kagame, according to the Angolan president, adding that the Congolese and Rwandan leaders have agreed on a summit that will take place in Luanda, on a date to be announced shortly.

Though Tshisekedi suddenly raised his voice on Sunday, he said he was still seeking peaceful relations with Kigali. “I have always maintained that you have to build bridges rather than walls,” said Tshisekedi.


On the same occasion, Denis Sassou Nguesso, president of the Republic of the Congo, said that he was “confident” about the resolution of this crisis. “I think we will quickly overcome these difficulties and bring peace through dialogue,” he said.

According to a study conducted by the Kivu Security Tracker (KST), M23 is one of more than 120 armed groups that roam eastern DRC, an agitated region with fragile peace bordering Uganda, Rwanda, and Burundi, all with complicated background stories.

The recent escalation between M23 and the DRC could lead to another crisis that would have immeasurable humanitarian and political consequences for the region, warned Xia Huang, the UN secretary-general’s special envoy for the Great Lakes region.

In his recent remarks in front of the Security Council, Xia said the situation today was reminiscent of the M23’s operations nearly a decade ago, when the group seized the city of Goma, urging ambassadors to do everything to avert escalation and another crisis which would have immeasurable humanitarian and political consequences for the region.

Xia said eradication of armed groups in the eastern DRC requires a comprehensive approach, particularly in the context of the M23 resurgence and persistent insecurity, noting that the “military option” alone will not be enough.


“The region doesn’t need a new crisis; let’s keep the channels of dialogue open at all levels, including at the community level; and help preserve the progress achieved in recent years thanks to the various cooperation mechanisms,” said Xia, who is now on a mission in both Rwanda and the DRC to mediate the diplomatic tensions.