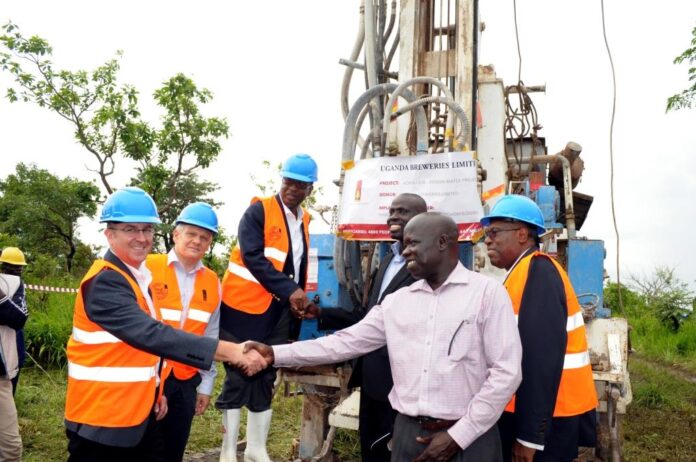 A few years ago, Nile Breweries Ltd (NBL), part of the Anheuser-Busch InBev (ABInBev) family, was sitting on top of the mountain after overtaking Uganda Breweries Limited (UBL) as a market leader. The beer company controlled more than 70 percent of the market.
Not anymore.
Uganda Breweries, a subsidiary of East African Breweries, in which Diageo is a majority shareholder, has since regained its top position thanks to her innovations and the strategic mistakes at the NBL.
Nile Breweries Ltd brands include: Nile Special, Club Pilsner, Eagle Lager, Eagle Extra, Eagle Dark, Nile Gold, Castle Milk Stout, Redd’s, Redd’s Vodka Lemon, Castle Lite, Chibuku and Club Twist.
Uganda Breweries brands on the other hand, include: Guinness, Tusker, Bell, Serengeti, Red Label, Smirnoff, Bailey’s, Alvaro, and Malta.

Marketing gurus agree that the company made a huge blunder to sell-off mineral water bottler- Rwezori Bottling Company. In Uganda beer drinkers add water to their favorite drink. The blunder has costed them- Rwezori mineral water boasts of over 60% of the bottled water market. Shortly, after takeover, Mark Bowman, the head of SABMiller, said they had bought water operations to take advantage of the market for safe drinking water in Africa.
Rwenzori, was acquired by SABMiller in 2010. In 2014, the Coca-Cola Company and SABMiller group, agreed to combine the bottling operations of their non-alcoholic ready-to-drink beverages. In the arrangement, a new firm called Coca-Cola Beverages Africa was formed.

Poaching: UBL also tapped into some of Nile Breweries’ key staff and top performers. Key among them is a former Eager manager who had helped push the brand to greater heights. Uganda Breweries poached him, more than doubled his salary. He has been instrumental in pushing sales of Senator Lager. Senator competes with Eagle Lager, Eagle Extra, and Eagle Dark.


A big blow to Chibuku

Research reveals that more than half of all Uganda’s beer market is commanded by the low- end segment, beer is a pastime for this segment who are the majority. They consume in volumes that are needed to make profits.
Chibuku, low end a beer was at one time growing at 500 percent. However, when, the government announced an excise duty increment on beer manufactured using local materials [sorghum, barley, and cassava] from 20 per cent to 30 per cent, the price of Chibuku went up. Many of her customers, who are price sensitive, could no longer afford to buy their favorite beer, whose price had increased by UGX. 300. While, Nile Breweries boasts of volume Uganda Breweries focus is on value.
2018, Nile Breweries Limited said they had been forced to close their Chibuku production line because of the 30 per cent excise duty, which was slapped on the brew. Mr Onapito Ekomoloit, the NBL director corporate and legal affairs, told Daily Monitor said they were forced to shut down the production line because government failed to honour the tax holiday it had promised them when they were setting up the factory. Mr Ekomoloit said government has instead been taxing them for the last five years.
“We have spent five years telling government that this product is competing with the illicit brew such as malwa and sachet waragi but unfortunately, tax was introduced on opaque beer and we cannot compete with beers such as Senator and Ngule,” he said.


Whether Uganda Breweries had a hand in pushing for the increase in this tax or not, it worked in their favour.

Old rivalry: back then, beer industry was easy to run. Bottles were the same and belonged to the market. Anyone who paid for them would use them. For long UBL & NBL the shared bottles. One company would collect empties, remove labels and put beers and the cycle would continue like that.
However, when Nile Breweries replaced their old plant In Jinja they took their old plant to South Sudan and started local production thereby tapping into attendant benefits available to foreign investors like low taxes on locally produced products. It is said, they negotiated with South Sudan government to increase taxes on all imported beers including those of Uganda Breweries, making imported beer expensive. There is rumour that back the when Nile Breweries first introduced new bottles, they would exchange them for old ones. Over a period of one year, they collected all old bottles including those of Uganda Breweries and took them to South Sudan where their plant was placed. When Uganda Breweries went to the market to the collect bottles,-there were no bottles. They had to look elsewhere-what an expense. Tit for Tat, is a fair game-right?
Stakeholder management: You need to keep an eye on your competitor[s], watch their moves and plan according to avoid surprises.

Some little things can make a huge impact: Uganda Breweries discovered that an elephant is a well-respected cultural symbol, for the people of Acholi. They went ahead and set up a huge, beautiful symbol of an elephant as you enter Gulu town.
The launch was attended by cultural leaders from the region. The event was followed by heavy activations in the region. You guessed right. The sales for Uganda Breweries brands have gone up.
Beer is an addictive drink. Once people start enjoying a particular brand, it is difficult to change their taste to another one. To shake the tables, Nile Breweries may have to get out very fast from the ‘recess’

On nearly every prominent bar, Uganda Breweries has put up a Johnnie Walker signage. At night the signage are very bright. This has increased brand visibility.
Numbers don’t lie. The results can be seen in the sales volumes of UBL’s brands.
Meanwhile, their rival is struck with the old fashioned wall painting. As one marketing guru put it, ‘’ the middle class is tired of this kind of marketing.’’
It is important to note that Nile Breweries does not sell spirits. So UBL is enjoying an advantage in the spirits segment, whose turnover is high.

In May this year, a confident UBL announced an increase in the prices of some of its products to match inflation. The company noted that the retail prices for Pilsner, Senator, Ngule and Smirnoff Ice did not change. The development comes against the backdrop of a general increase in commodity prices in the country.

also read: Why the Baganda have abandoned Ngule Lager

Nile Breweries Chickens out: In a statement, Nile Breweries said it will not increase prices for its products, warning sellers against hiking prices for their products.
The company, however, noted that the decision to maintaining the beer prices is not a guarantee that change in pricing will never happen.

read: fraud, insider dealing at Uganda Development Bank: 900m disappears just like that; could this be a tip of the iceberg?

read: Beer wars: Uganda Breweries vs Nile breweries, who will take the day?

Nile Breweries finds itself in a tricky situation. However, a well thought out strategy- the need to undertake a market study, a look at their people policy, will be good for their second coming.