Home Business After 20 years of dedicated service as Governor Bank of Uganda: Time... 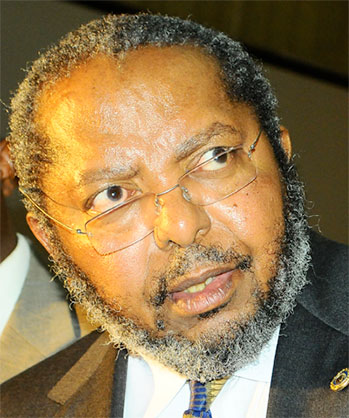 President Museveni recently re-appointed Prof. Emmanuel Tumusiime-Mutebile (ETM), Governor Bank of Uganda (BoU). He is set to face the Parliamentary Appointments Committee soon.
The development means, when his 5th term expires in 2026, ETM will have headed the Central Bank for a cool 25 years.
At 71, ETM, is the longest-serving Governor of the Central Bank. He has also been a controversial figure in recent years.

A seasoned professional economist and reformer, Mutebile, was first appointed to take charge of Plot 37/45 Kampala Road In 2001.
He was reappointed for the second term five year term In January 2006. Again in, November 2010, his term was extended for another five years.

The man who spearheaded the design and implementation of the Economic Reform Program that restored Uganda from the economic crises of the 1970s and 1980s to sound economic performance during his service as the Permanent Secretary to the Treasury in the ministry, was in 2016, reappointed for the 4th term. Making him to serve 20 years at the helm of Uganda’s banker of all banks.

Meanwhile; many including yours, thought this was ETM’s last term.
You guessed right. Qualified Ugandans [through Kampala power brokers and through their godfathers, began to position themselves to replace the aging economist, whose contribution speaks for itself.
I was wrong. They were wrong!


read:Panic as Museveni asks for BANK OF UGANDA FILE; who will be the next Governor, Deputy Governor?

On 13th January 2021, the appointing authority extended Mutebile’s contract for another five years.
There were murmurs.

After serving for over 20 years as Governor [a demanding job], ETM, is said to be tired.
There has also been media reports about his state of health.
You’re wondering; is Uganda short of talented, qualified, professional economists? Well a simple search will prove you wrong.
‘‘He [ETM] has for some time been helped to move around. It’s getting worse. For now, if he has to move from one side of the bank to the other, he moves in a wheel chair.’’ said a senior BoU official.

The official says the governor recently secured an automatic wheelchair which he operates himself.
‘‘Unlike in the past, journalists have been surprised to always find the Governor seated in his chair for the Monetary Policy Statement press conference. Some reporters have praised him for keeping time. However, the truth is, officials don’t want journalists to take photos of the Governor moving in a wheelchair’’ the BoU official told Newz Post


‘‘The allegations that Prof. Tumusiime is unwell are not true. ‘’ Charity Mugumya, Director Communications Bank of Uganda told Newz Post

she added: I can confirm that Prof. Mutebile is well.
However, she did not confirm or deny whether the Governor moves in a wheelchair while at office.

Mutebile; not your ordinary Ugandan

In 2013, ETM was named Africa’s best Central bank governor of the year for his leadership in fostering price stability; a key factor that boosted investor confidence in Uganda economy.
The award was given to him at the annual International Monetary Fund and World Bank group meeting in Washington.
A day off at the headquarters of the Uganda shillings is noticed by all and sundry. That is Mutebile for you.
That is how ETM has established himself at the BoU.

Mutebile, who worked as a consultant for multilateral and regional organizations including the World Bank, IMF, Organization for Economic Cooperation and Development, UK Department for International Development, the North South Institute in Canada. And for the governments of Rwanda, Kenya, Tanzania, Eritrea, and Nepal has tried to ensure price stability and received several global accolades for balancing the economy and politics.
That is not an easy feat.


His policies have been praised as spot on. The Central Bank’s primary role is to ensure price and economic stability. For long ETM managed including the 2006 and 2011 elections where a lot of money is said to have ‘circulated’ [don’t ask me by who] in the economy.

Thanks for the man who holds Fellowships of the World Bank Institute and Rotary Foundation of Rotary International, foresight there was removal of some ‘old notes’ from the economy and we went back to normal.
No wonder he received a ‘handshake’ inform of a 4th term.

That said, perhaps when the appointing authority looked around, only one man, ETM could manage the tides.
Others say, ETM’s reappointment was partly for balancing politics.
Mutebile was reportedly reappointed on the eve of the hotly contested presidential elections.
Some analysts say, his deputy will doing much of the work.
March this year, an experienced and highly respected economist Dr. Michael Atingi-Ego, was appointed deputy governor. He has served in several positions in the Bank of Uganda and international organizations.

Analysts say Mutebile faces a tough and a rough for his 5th and perhaps his very last term.

two years ago, as the contract for ETM and Deputy Governor [former] Dr. Louis Kasekende were coming to an end came. The battle lines for who should be the next Governor were drawn.

read:Museveni silent as the contract of Bank of Uganda deputy Governor Louis Kasekende runs out in two weeks
The BoU Staff were reportedly divided into two camps [perceived or real] for and against the Governor and his Deputy].
While the camp for Prof. Mutebile emerged triumphant, after Dr. Kasekende’s contract was not renewed. Analysts says Dr. Kasekende’s supporters could have lost the war but not the battle. At the right time they will fight.

the effects of Covid-19 have made matters worse [the FDI, remittances, and exports are low]. With the shortfall in revenue, rising debts and weak economy, ETM has more than what he can carry.
Uganda’s debt is seen rocketing to 49.9% of GDP by end-June, up from 41% the same month last year.
This, according to a Ministry of Finance 2021/2022 fiscal year budget planning framework.
The paper says the increase was due to a “need for extra borrowing to cover for both the revenue shortfalls and the Covid-19 related expenditure needs.
Total public debt amounted to $15.27 billion at the end of June 2020, up from $12.55 billion a year earlier. According to the budget paper, Uganda’s debt will peak at 54% percent in the fiscal year ended June 2023
Last year the central bank said Uganda’s surging public debt was becoming a drain on public resources that could otherwise be used to finance development.
The Director Communications at Bank of Uganda In an email, said all is well ‘‘Uganda’s record of strong macro-economic performance spanning the last three decades, puts the country in a good position to handle greater debt accumulation. The country has adequate external reserve buffers, which at end-December 2020, stands at 4.6 months of import cover against the IMF’s recommended benchmark for low-income countries of 3 months.


She added: At the same time, the economy is expected to recover in the near term. The recovery in economic activity is projected at 3-3.5 percent growth of GDP in FY 2020/21, 4.5 percent in FY 2021/22 and 6-7 percent in the outer years. With this recovery, the ratio of debt-to-GDP is expected to fall. Moreover, the expected increase in revenue and export earnings as activity picks up will enhance the country’s capacity to service its debt.
A recent International Monetary Fund- IMF report raised a red flag at Uganda’s rate of borrowing warning that by 2022, the country’s debt would be unsustainable.

Rift with BoU board of directors

the rift between the Governor and the board first came public in 2019.
A confidential Report of the Presidential Tripartite Committee that was formed by President Museveni to investigate the Bank of Uganda, Governor, over his unilateral decision to recruit and make staff changes as announced on February 7, 2018


The report says the board members interviewed disassociated themselves from that decision and said Prof. Mutebile violated the BoU Act when he took the decision without involving all members of the board and senior management.
Further, the report says the Human Resource and Remuneration Committee of the Board disowned Mutebile, saying they had no input at all in the staff changes.

More about the author: MOSES KAKETO