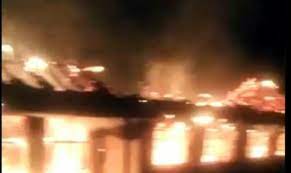 Four school children on Saturday died in a fire outbreak police said Saturday.
Luke Oweyesigyire, police spokesperson for the Kampala Metropolitan area, says the fire started at around 3 a.m. from one of the female pupils’ dormitories at New Crest Junior at Kibedi Day and Boarding Primary School in Kawempe division, a Kampala suburb.


“Four of the female pupils have been confirmed dead while three are seriously injured and rushed to Kyadondo hospital located in Kisowera zone,” Oweyesigyire said, noting that investigations have started into the cause of the fire.
He said the owners of the school failed to alert the police after the fire outbreak, which was an act of gross negligence that caused death and injuries.
“I was sleeping when our teachers came into our dormitory and told us to get out of the dormitory and converge in the compound. Our teachers started to pour water in the dormitory as I saw them pulling out pupils who were dizzy now,” Ibrahim Ssegawa, a primary three pupil said.


Several parents rushed to the scene to collect their children that survived, although police and school authorities blocked them from accessing the place.
Mansul Ssentongo, a parent at the school said he lost his daughter, Husna Nakawuki, a primary three pupil in the inferno.
“I brought my daughter on Monday after the opening of the school. I got a telephone call in the morning from school directors, saying that my daughter had died in the fire outbreak. I am stuck here at the gate of the school because I am not allowed to access the scene,” Ssentongo said.

School fires are common in Ugandan schools although most of them are not fatal.
The last fire was in 2018 when at least nine students were killed in a fire that broke out at a high school in central Uganda. Before the 2018 incident, another fatal school fire happened in 2008, killing 19 pupils at Budo Junior School in the Wakiso district in the central region.
Xinhua