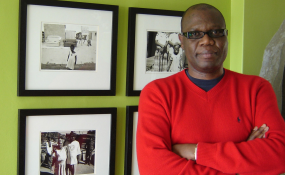 Artist Zwelethu Mthethwa was on Wednesday sentenced to 18 years in jail for killing sex worker Nokuphila Kumalo in 2015.
“The accused’s standing as an international acclaimed artist does not earn him a special sentence,” said Western Cape High Court Judge Patricia Goliath.
“The courts need to send a clear message to tackle gender-based violence. The killing of women in general will not be tolerated. The killing of sex workers in particular will not be tolerated.”


She rejected suggestions by defence experts that he should be given a non-custodial sentence.
Mthethwa, 57, dressed in a dark suit and with a freshly sprouted beard since his conviction, did not show any emotion as the sentence was handed down.
Sex workers in the public gallery jumped up, shouted and applauded upon hearing that he would be going to jail.
Goliath said she did not find substantial and compelling circumstances to deviate from the minimum sentence of 15 years imprisonment for the murder.
In fact, the “callousness, cruelty and brutality” of the attack were aggravating factors.
Kumalo, 23 was killed on April 14, 2013 in Woodstock. She died of blunt force trauma and was kicked repeatedly next to Mthethwa’s Porsche.

“Her injuries are indicative of a high degree of force. The liver was virtually torn in half. She had various rib fractures and blunt force injury to the face,” said Goliath.
“The question that has not been answered to date is: ‘What went wrong?'”
Mthethwa said he could not remember anything of that night, and chose not to testify, or explain his plea.
The court believed that his last-minute reliance on a defence of memory loss and intoxication was an attempt to deceive and reduce blameworthiness.
“The footage clearly shows that the perpetrator was not under the influence.”
The court made mention of his impressive CV, his artistic talent, and the financial and emotional support he offered to disadvantaged students and others in the community.


Goliath said the objectives of retribution and deterrence, however, should weight more than the objective of the offender’s rehabilitation.
“It is unimaginable to describe the horrific incident which saw a young woman attacked in the most brutal manner.”
Kumalo was defenceless, posed no threat and would have been even more vulnerable with alcohol in her system.
“He left the Corner Lounge that night, went home, and after one hour and 10 minutes, left for Ravenscraig Road. He had ample time to reflect while he was at home, but was determined to confront the deceased and proceeded to kill her.”


He kicked her more than 60 times, paused during the attack and then chose to continue. In court, he chose not to disclose the reasons for his rage.
His defence will apply for leave to appeal his conviction and sentence.
Source: News24