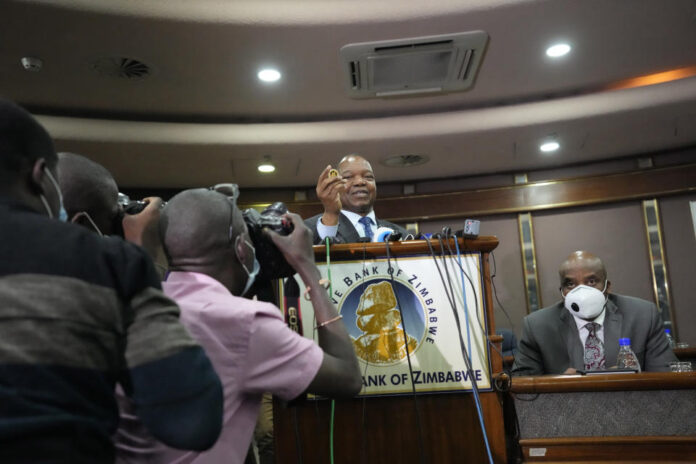 The Reserve Bank of Zimbabwe Governor John Mangudya on Monday unveiled gold coins that are expected to act as a store of value and reduce the demand for U.S. dollars as the country battles to control soaring inflation.
“The Bank has today released the first batch of 2,000 Mosi-oa-Tunya (The Smoke Which Thunders) gold coins to the market. Local agencies commenced selling the gold coins on an agency basis at the initial price of 1,823.83 U.S. dollars per gold coin or 805,745.35 Zimbabwean dollars using the willing buyer willing seller selling rate as at Friday,” Mangudya told a press conference in Harare, the capital of Zimbabwe.


Among other characteristics, the gold coin will have liquid asset status, prescribed asset status, can be used as collateral, is tradable and can be bought back at the instance of the holder.

Individuals, domestic corporates including institutional investors will be allowed to buy the gold coins in local currency as well as foreign currency, while international buyers will only buy the coins in foreign currencies which include the U.S. dollar, South African Rand, and British Pound among others.

The price of the coin is based on the prevailing international price of gold plus 5 percent to cover the cost of production and distribution of the coin on a payment versus delivery basis.


“The gold coins as we have advised before, are a good alternative investment product for those who want to store value. Gold is a safe and secure reserve asset throughout the world,” said Mangudya.

He also said individuals and institutional buyers will be required to hold the coins for at least 180 days before selling them, adding that all sales will be subject to Know Your Customer and buyers will be required to declare the source of their funds.
The introduction of the gold coins is part of the government’s measures to tackle the country’s currency crisis which has seen the local dollar rapidly depreciating.


“What we expect to see is that we see stabilization in the exchange rate and therefore by extension the pass-through effects into the prizing system all going down. And therefore we expect to see price stability in the economy,” Mangudya said.
Following years of hyperinflation, Zimbabwe abandoned its own currency dollar in 2009, opting instead to use foreign currencies, mostly the U.S. dollar.


The government reintroduced the local currency in 2019, but it has rapidly lost value, bringing back memories of a period of hyperinflation which eroded many people’s savings.