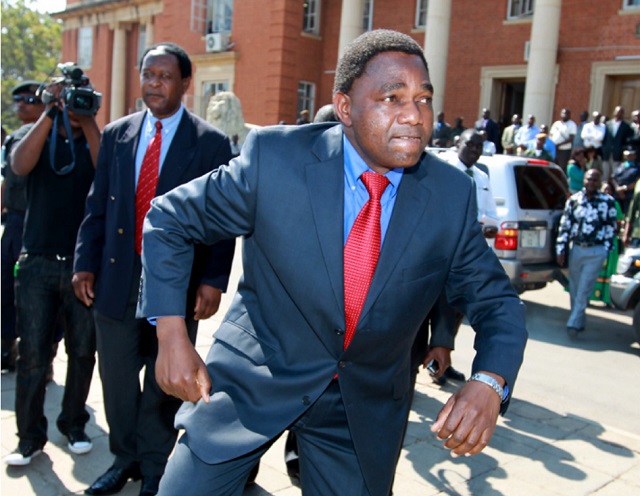 President Hakainde Hichilema sworn in 17 Ministers.
Speaking during a swearing in ceremony at State House in Lusaka, President Hichilema urged the Ministers to channel resources from their respective ministries to key areas of the economy.
The President stressed the need for appointees to serve the people of Zambia diligently.


President Hichilema, also an economist, urged the incoming Ministers to seal off all financial loopholes without allowing corruption to register its presence in government ministries.
“God loves Zambia because he has given the country everything and it is the responsibility of government to harness the country’s abundant resources and turn them into wealth for the country and its citizens,” he emphasized.
“At all times act for and on behalf of the people of Zambia .You are appointed not for any other reason, but to serve the people of Zambia not just to serve but to serve them diligently” he pointed out.

President Hichilema has also highlighted 3 principles to be used in public procurement of goods, services and works.
“We shall buy goods, services and works at the right price, the right cost, the right quality and the service, goods or works must be delivered within the specified time” the President said.
He further emphasised that his administration will not tolerate corruption, and that the law will be applied where there is graft.


He reminded the ministers that there is always a Fish Eagle around to check what is happening in reference to his watchful oversight.
“There will be a Fish Eagles watching around and the Zambian people too will be watching you,”

Hichilema’s journey to the top

Born into a low-income family in southern Zambia, Hichilema has cast himself as a self-made businessman who worked hard at school to win a government bursary to attend the University of Zambia.

He graduated with a degree in economics and business administration. Hichilema continued his studies abroad at the University of Birmingham, earning an MBA. He returned to Zambia and led the Zambian operations of Coopers and Lybrand – later part of PricewaterhouseCoopers and Grant Thornton. His business portfolio diversified and now includes property management, financial consultancy, and tourism. Additionally, Hichilema owns one of Zambia’s biggest cattle herds and cattle ranching.


About the latter, Hichilema said in May that “I’m just a cattle boy. … It’s a childhood love.” He said he was “an ordinary citizen, an ordinary African.”

But, for analysts, Hichilema’s rise to Zambia’s business elite and considerable wealth made him an outsider in the election. He has contested six elections in total. He first ran for the presidency in 2006 as a member of the United Party for National Development (UPND), an organisation he also partly bankrolled. But this year, buoyed by the endorsement of Zambia’s other opposition parties against incumbent Lungu and an ailing Zambian economy, Hichilema won.


Zambian analyst Neo Simutanyi said Hichilema’s 15-year career as an opposition politician prepared him for the presidency. “We’re looking at someone who has grown into the role of political office by being able to engage to opposing politicians for long and accumulated serious political experience,” Simutanyi, who is also executive director at the Centre for Policy Dialogue in Lusaka, told DW.