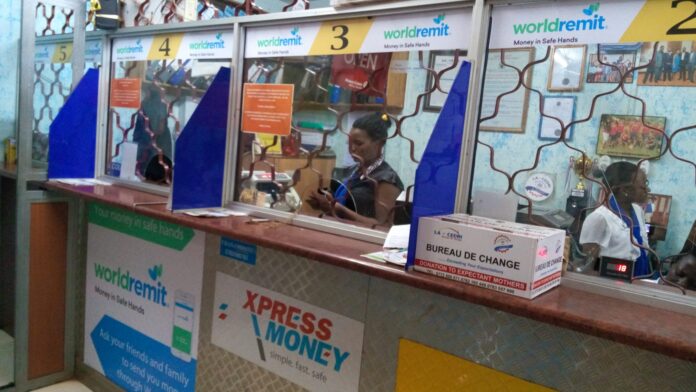 From 6 June, WorldRemit will not be accepting any new money transfers or airtime top ups from Uganda, the UK-based company has announced. WorldRemit is a digital payments service that provides international money transfer and remittance services in more than 130 countries and over 70 currencies

Registered under WorldRemit Money Transfer Uganda limited, and licensed by Bank of Uganda, their offices are located at plot 17/19 Kampala road, 3rd floor DBT Centre
The company revealed that from 6 July, it will be fully closing money sending services in Uganda, and ”our relationship with you will come to an end”


WorldRemit’s mobile-first, digital model saves customers time and money, as they do not have to visit bricks and mortar agent to make transfers. WorldRemit customers complete one million transfers every month from 50 countries to over 145 destinations. More than half of its transfers go to Africa.

Last year, The Executive Director of the Finance Intelligence Authority, Sydney Asubo revealed that Uganda risked being blacklisted by the Financial Action Taskforce (FATF) if the government does not tackle money laundering by May 2022.
The FATF is a cross-border working group against money laundering. Their facts are 97% of 120 countries need to make fundamental or major improvements to the effectiveness of measures in place in the private sector to prevent money laundering and terrorist financing.
The purpose of money laundering is to make the funds from criminal activities appear as legitimate income. This can be proceeds from corruption, human trafficking, undeclared work, tax fraud, illegal arms sales or traditional crime such as robbery and theft.

The money laundering process is often described in three steps; placement, covering and integration. In the first step, it is about getting the money into legal business, e.g. by dividing larger amounts into smaller sums that cannot be easily traced. In the next step, the origin of the funds can be further covered so that direct association with the underlying criminal acts is removed. In the last phase, the money launderer can move the funds so that they enter the legal economy, and can be used freely, for private consumption, luxury assets, real estate investment or investment in legal activities.
FATF facts say 91% if 120 countries fail to provide information about the real owner of companies and provide to make available competent accounts without hindrance; in fact, it accounts for 7.6% of GDP – the average impact on a country’s capital inflow from being listed by the FATF, as estimated by the IMF. It’s such requests, which are often unanswered, that some choose to cease operations with such countries – especially this characterizes Africa, which is already struggling and investigating corruption.
Asubo who was appearing before the Committee on Finance last year, said that the FATF maintains a watch list of countries that have significant shortfalls in tackling money laundering categorised under the grey list and the black list.


“Uganda was placed in the grey list in 2020. It means the country has been identified but it made commitments with the FATF to address the specific issues within a given time frame,” he said.
Others on the list were: Botswana, Burkina Faso, Ghana, Mauritius, Morocco, Pakistan, Panama, Senegal, Syria, Yemen, and Zimbabwe
For a country on the blacklist, FATF calls on other countries to apply enhanced due diligence and countermeasures, increasing the cost of doing business with the country and in some cases severing business relations altogether. Even countries placed on the gray list could experience a disruption in capital flows.
Asubo added that the FATF wrote to the Minister of Finance who wrote back making commitments to address the identified issues by January 2022 but later pushed to May 2022 because of the impact of Covid-19.
“Unfortunately, a number of issues are still outstanding so the FATF is concerned and has written that if these issues are not addressed, then the country will be moved to the blacklist,” he said.
Asubo said the consequences are dire because the impact of being on the grey list means that the world is aware that the country is having challenges in addressing money laundering.
“Some people have already started feeling the impact especially international transactions which would take a day or two, are now taking a week or two. That process of scrutiny is beyond the normal scrutiny,” he said.
According to the FATF evaluation, Uganda was deemed largely complaint for five of the FATF 40 Recommendations.
Asubo said that whilst the FIA has largely played its role in fulfilling the requirements, other ministries, departments and agencies are falling behind, including those that are under the Ministries of Finance, Internal Affairs and Justice.
He said that in the 2020/2021 financial year, the authority received and analysed 2,419 suspicious transaction reports (STRs).


“Out of the 2,419 STRs received and analysed, 76 intelligence reports were generated and disseminated to various law enforcement agencies for further investigations,” said Asubo.
He however, urged lawmakers to allocate Shs12.2 billion to cater for unfunded priorities, which include staffing, information and communication technology and public awareness among others to enable the Authority carry out its mandate.
According to the Budget Framework Paper (BFP) for 2022/2023 financial year, the authority has been allocated Shs16.7 billion.
“The Shs16.7 billion means that we shall not be able to recruit and yet the mandate of the authority is huge compared to the current staffing level. The volume of work is big and the backlog is beginning to build up,” Asubo said.
To meet the required staffing level, Asubo said, the authority requires Shs2.5 billion.
“Right now we are 43 staff, against the approved structure of 83 for the head office,” he said.
Asubo added that the Authority requires additional funding of Shs2.8 billion to enhance ICT. He said that the current allocation to ICT is Shs800 million and yet they need Shs3.7 billion.


WorldRemit has good processes and routines that involve confirmation of identity on the basis of valid documentation, information about the company’s real rights holders and any politically exposed persons, and obtaining information about the purpose and intended nature of the customer relationship, even a politically exposed person is a natural person who holds, or during the past year, has held a senior public office or position; this can be: head of State, head of government, minister or deputy minister, state secretaries are also considered to be covered by this definition.