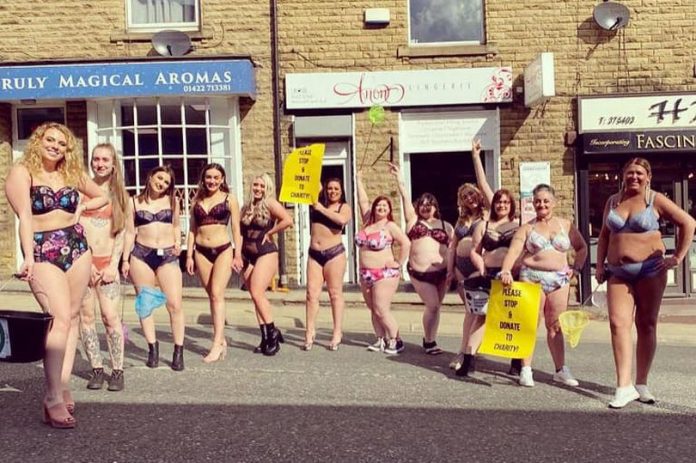 Customers and volunteers backed by Anon Lingerie at Elland, dressed only in their smalls and braved the unpredictable Yorkshire [the streets of Calderdale ] weather to rally passing motorists for donations.
The shop managed to raise a staggering total of £2471.75 for charities Anon Uganda- the examinerlive reported.
The charity collect used bras for women in need in Uganda ad SEW UK
SEW is a charity that helps single mums in Uganda get onto skill-building training courses and puts their children into school while they are training.


The boutique encourage women and men of all shapes and sizes to get involved in the name of body empowerment, something that is very important to Anon Lingerie owner, Rebecca Illingworth-Sedgewick.
The charity stunt caused excitement with the locals of Elland who took to Facebook to applaud and encourage the girls.
One passer-by said: “The only criticism I have is that it cost me a bloody fortune, after driving around at least 6 times, well done ladies, keep up the good work!”
“You were all phenomenal. Be proud of yourselves, you created such a positive environment that will help empower women who are forever being beaten over the head by airbrushed ‘perfect’ examples of womanhood in all types of media.” Said another

Second hand bras are collected in a small lingerie shop, Anon Lingerie, by Rebecca Sedgewick and her team.
Ugandan mums taking part in employment training with SEW are given their bras in a community centre owned by the charity.
Rebecca helps them to get the right fitting bra via Zoom, with help from SEW’s translator and Uganda-based Manager Jess Agolo.
Having a bra will help the Ugandan women to find jobs, and may protect them from sexual violence, Rebecca and Yasmine say.
The project has been such a success they are opening a charitable branch of Anon Lingerie in Uganda- according to halifaxcourier
Rebecca said: “One of the ladies started crying at the last fitting, she felt such gratitude and kept thanking me for this second-hand bra.
“A bra is a sign of status and respect in Africa, I have heard, women wearing a bra are less likely to be raped, and most of them don’t own a bra.


“The women have all been so grateful for the bras we have given them.
“They all say they will keep them for best, but I said they need to be wearing them all the time.
“So I’ve made it my mission that each of them will have six bras.
The project is going so well Rebecca and Yasmine are opening a branch of Anon Lingerie in Uganda too.
Rebecca said: “Come October we will have a branch of Anon Langerie in Uganda, I am so excited I may burst.
“I will train two of the ladies on SEW’s project to fit bras, and Anon UK will fundraise to cover the costs of the shop rent and organise the donated bras.


“The ladies will draw a wage from the shop and this should enable them to support their families long term.”
Rebecca, 30, opened her lingerie shop, Anon Lingerie, in Elland, near Halifax, when she was 20, her sister Amanda, now 27, joined her two years later.
Rebecca first became involved with the bra project when SEW owner Yasmin Benalkadi did a social-media shout out for donated bras.
Yasmine, 22, works as a carer in Leeds, and started the charity in October 2019, she visits Uganda about twice a year.
She added: “There are a lot of single mums in Uganda for various reasons.