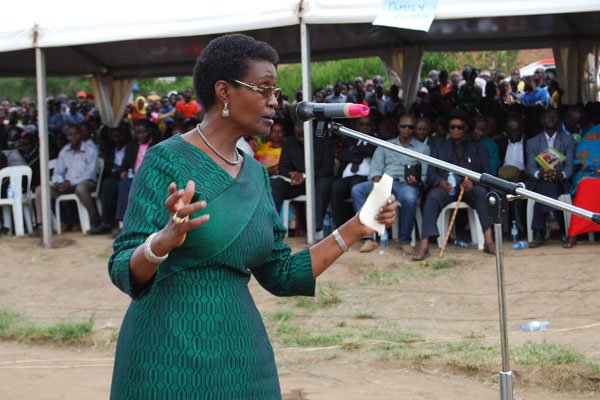 Thousands of mourners on Sunday travelled to Ruti Village in Mbarara district to bid farewell to Mzee Bonafice Byanyima.
Among the many, were religious leaders, politicians, government officials and businessmen. President Museveni was represented by Foreign Affairs Minister Hon. Sam Kuteesa.
The president in a speech read by Hon. Sam Kuteesa, the president praised the late for saving his family in two difficult times that he will never forget.


“When I was chased out of school in 1960’s over school fees, Mzee Byanyima took me and my father to the headmaster and stood surety.” the president noted.
Mzee Byanyima again saved the president’s family in 1980’s when the Obote’s government was persecuting his family. Museveni’s mother took refuge at Byanyima’s home, until she managed to escape into neighbouring Rwanda.
Hon. Kuteesa told mourners that the president was unbale to attend the burial because he was away on East African Community engagements.
The president on Saturday assumed the chair of EAC during 18th extra ordinary Summit that was snubbed by presidents from Kenya, Rwanda and Burundi. They only sent representatives.

The president of the Democratic Party, Norbert Mao praised the late for the many contributions that he made towards DP and the country at large. The late Byanyima served the country in different capacities as an educationist, politician, farmer and businessman
Mao told mourners that it was unfortunate that Mzee Byanyima passed away without seeing peaceful transfer of leadership in Uganda. Adding that, change is a fact of life; this change of leadership will eventually take place.


Kabaka of Buganda Ronald Muwenda Mutebi II also paid tribute to fallen veteran politician. In a condolence message read by Julius Kanyamunyu, and addressed to the family of Mzee Byanyima, Mutebi expressed grief at the demise of the statesman saying that his long and illustrious public life was an epitome of leadership based on integrity.
In her speech, a composed Winnie Byanyima asked President Museveni to give peace a chance and not tamper with the constitution.


“The time of President Museveni has come to an end. If he were here it would have been better. There is a clause, in the constitution which limits the president’s age. Speaking the truth my father who we are about to burry today, I ask the people of NRM and President Museveni not to dare tamper with the Constitution of Uganda. Don’t dare!”

She added: President Museveni, our good president, with all the good things he has done, at that point, will not be allowed to run again for office. Our country is the only one in East Africa that has not seen a peaceful transition of power. Ugandans should not be denied chance to effect their own peaceful transfer of power.