Home Lifestyle Who will rescue the National Theatre? Cultural centre is in a total... 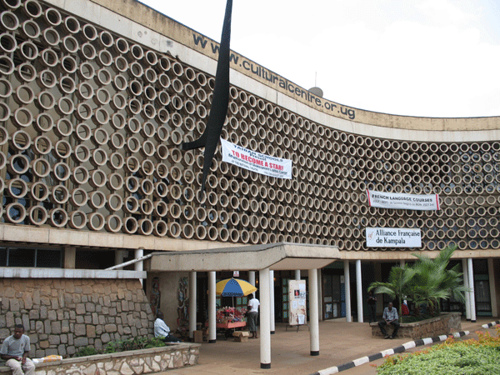 • Stakeholders issue a dossier to President Museveni
• Faces closure over billion shillings in URA tax arrears
• The film unit produces nothing, despite having equipment, the audio studio produces nothing
• A performing group booked the Theatre for a show and found there were no lights.

A group of concerned artists have written to president Museveni to come to rescue of National Theatre whilst Uganda is effectively losing her grip on the single asset that spells out, on the one hand, our legitimacy as cultural beings. As well as our drive to share our culture (past and present) and excitement to amplify our contemporary expression(s) as Ugandans.

The National Theatre through the Uganda National Cultural Centre UNCC is mandated grow and develop the theatrical, artistic, creative, filmic and cultural expression of Uganda and Ugandans. The theatre is also mandated to preserve, promote and popularize Uganda’s cultural heritage locally and internationally. Through entertainment and educating the public using theatre and film. It is also supposed to enhance and safeguard the quality and standard of the arts in the country. According to Philip Luswaata and his colleagues, management has failed miserably towards this mandate

In a 61-page dossier the artist’s claim, this is mainly because of mismanagement.

‘ ‘The National Theatre is dismantled brick by brick as she is stripped of her legitimacy by a management, whom by their own admission, have no background whatsoever in arts management and who obviously cannot fathom the immense potential of a well managed/guided creative/cultural industry.’’

Sources say, the outstanding obligations inherited from previous management that is VAT, PAYE to Uganda Revenue Authority, Property rates to KCCA and staff Gratuity has multiplied since Mr. Francis Ojede took over in 2013.

‘‘When the previous management of Joseph Walugembe left, National Theatre indebtedness to URA had actually come down to the region of approximately One Hundred Millions, since the new administration took over, this has risen to near a billion shillings! How then is this inherited? Where this claim were true, what financial sense does it make then that a management that inherited a vast financial burden went ahead to increase on this burden rather than decrease it, to the the point that paying salaries is now a burden, where it wasn’t before?’’ The dossier reads in part.

Mr. Luswaata cites one incident recently when a performing group booked the Theatre for a show and found there were no lights.

‘ ‘To address this anomaly, the Procurement Manager personally went to ‘Kikuubo’ and bought plenty of 20-watt domestic energy saver bulbs for the professional lamps at the Centre that require 2000-watt bulbs! This is the clearest indicator of a management without any idea of what they got themselves into. It is common technical knowledge that all of the lighting, and other equipment at the National Theatre are obsolete. Theatres abroad shed this type of equipment every five years and would be excited to twin with a national Theatre willing to receive them. If individual artistes have this sort of arrangements with organizations abroad, why not the National Theatre? Unfortunately, they lack in proactively and enlightenment. ‘’ he says

The artists cite some of the failings of the current management

The Musicians/Arts Club: This was a center for informal mentorship. Aspiring and established artistes shared this space and learnt from each other, pushed each other to produce and positively criticized each other for the betterment of the craft.

‘ ‘In its good days, it hosted the hugely popular Monday Musicians Jam sessions that required established artistes to share a stage with upcoming ones, for free. This paved the way for such success stories as Juliana Kanyomozi, Irene Namubiru, Chameleone, etc. Such a space that affected the lives of thousands of artistes was turned into an office for a single client.’’

The Studio: This one, previously with the potential to record sound and video for live broadcast from the Centre to UBC is currently a shell.

The auditorium: A space that should be selling spectacle with the potential for immense magic currently boasts less than ten working stage lamps from its potential of hundreds; broken seats to host theatre enthusiasts; Insufficient carpenter staffing, where we should be pushing for building magical sets for productions we host there.

National Theatre Parking: This effectively alienated the UNCC from her stakeholders. The equivalent is like requiring Members of Parliament to pay for their parking slots at Parliament. Would they effectively legislate for us under pressure of hourly charges for the longer they take doing what they are required to do? As a result, hardly any artiste who drives aspires to go to the National Theatre anymore.

On 18th February 2015 , a group artists who are dissatisfied with current state of National Theatre held meeting with Mr. Pius Bigirimana, the Permamenat Secreatary. The PS advised on a number of issues including:

The Green Room will be handed back for theatrical and artistic work/initiatives by the beginning of March 2015.

That The Executive Director and his team should be formally introduced to the arts fraternity they guide. The PS also recommended that the new UNCC Board will have a representative from and seconded by artistes.

Mr. Bigirimana also recommended that the core business of the National Theatre is the auditorium (not parking and rent as is currently the case) and should be handled preferentially.

‘‘These recommendations were to take effect on 4th April 2015 and were to be reviewed after 3 (Three) month. They never took effect and no explanation has ever been advanced by the UNCC management. Needless to say, this applies even to all the other recommendations made at the meeting with the PS Mr. Pius Bigirimana at his office on 18th February 2015. ‘’ Mr. Philip Luswaata said.

In press statement issued at the end of last year the National Theatre Executive Director, Mr. Francis Ojede noted that they have achieved a lot since taking office.

‘‘Since taking office in 2013, management prides self in participating at steering committee level in Jamafest 2015. But don’t mention preparedness for hosting the same in 2017; they have held 1 ethnic exhibition and a workshop; 4 annual exhibitions, 4 solo exhibitions; the weekly Jam Session (which has always been but lost its popularity under the current management), produced and staged only 2 set plays! Staged only 120 creative nights in a period of over 150 weeks! Staged only 208 performances in a period of over 900 days! It is disheartening to mention such under-achieving statistics with pride to National Media!’’

In the dossier, the artists also downplay these so-called achievements

‘ ‘All the artistes who read this document were in agreement that while it dazzled with colour, graphs and pie charts, was far below the potential to guide change. And was obviously the work of individuals with no hands on experience in managing theatre, entertainment and art) do not rhyme with what is expected of this institution and its mandate towards growth and development of theatrical, artistic, creative, filmic and cultural expression in Uganda as we intend to demonstrate’’

‘ ‘Despite existing, the auditorium is never full and many weekends pass with no activities, the restaurant remains with lack of innovation and offers the worst food on the street, the bar is ill-stocked, despite the efforts of the barman, the dance studio offers no classes, the green room host the Tourism Board-who do not benefit the Centre in any way, the upper garden stage is hardly ever used, the jam session doesn’t attract crowds anymore, etc. Considering this scenario, is it surprising that Management lacks resources? Since they took over office, they have never had the wisdom to invest in the core businesses, which are what have sustained the Centre for decades. The performance and creative arts and cultural industries are wealthy and thrive on innovation, creativity and proactivity, not manuals, like would benefit a seller of tangible commodities.’’

The artists are calling for the concerned authorities to come to the rescue of the national theatre before it is too late. Efforts to talk to Mr. Ojede the Executive Director were futile as his phone was off.