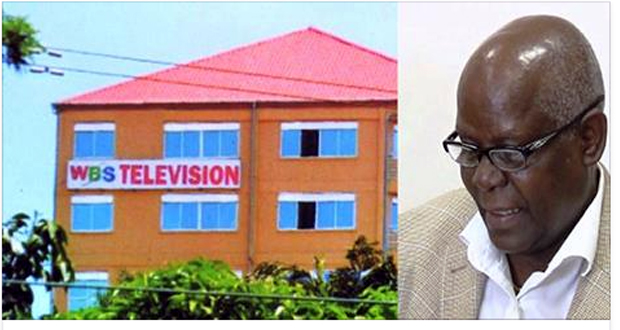 The once mighty Wava Broadcasting Services (WBS) owned by city tycoon Gordon Babala Kasibante Wavamunno, but often referred to simply as Gordon Wavamunno is no more.

After nearly 20 years of service, WBS TV ceases operations as public broadcaster today 14th December 2016. The Station’s assets will be sold off to recover part of the money it owes to Uganda Revenue Authority while all existing contracts will be terminated.

Closure of WBS TV comes after the committee appointed to manage the media house  failed to recover Ugx. 7bn in unpaid taxes to URA despite turnaround strategies to recover all taxes.

‘ ‘ As you are aware, WBS Limited was placed under receivership by Uganda Revenue Authority to recover Ugx. 07 billion in unpaid taxes. It had been hoped initially that the company would be revamped through the employment of various turnaround strategies that would restore the company to solvency and recover all the taxes due’’ read a letter signed by Mr. Karamagi.

Mr. Karamagi was appointed by URA to manage WBS after it was takeover from Ugandan millionaire businessman WavaMunno over unpaid taxes.

Unfortunately, this option proved unviable on account of lack of capital to meet urgent needs necessary for the preferred turnaround strategies. As a result, the only option available was to sale the company’s assets to realize the monies due.

Mr. Karamagi concludes: While this episode may evoke sadness and regret, Iam confident that the new investor will give the public far better opportunities than any other television station in the market. I therefore hope you extend the support and cooperation you have given to WBS to the investor when he unveils himself.

READ: NBS TV, Who is not watching?

Gordon Wavamunno, is a Ugandan entrepreneur, businessman, and philanthropist. He is reported to be one of the wealthiest people in Uganda

About Wavamunno
Born in 1943 in Rugaaga, Mbarara, the young and entreporzing Wava Munno  ventured into business at an early age after his secondary school, having acquired skills and the acumen from assisting his father in running the family retail shop.

Like most tycoons of yesterday, Wava Munno  started working for an Asian family in their produce stores in Mbarara, later graduating into buying produce from the villages around Mbarara, selling to the Asians.

Using his first car, he ventured into special hire business in Mbarara, eventually growing into a driving school and then, Spear Touring when he relocated to Kampala.

It is  company that gave birth to the flagship of his business empire, Spear Motors. Spear Motors Ltd is mainly a Mercedes Benz franchise. The company has diversified into the American brand Jeep and recently brands from China, notably Great Wall and Wingle.