Home Health & Fitness UNESCO: Nearly 300 Million Students Out of Class Due to Coronavirus 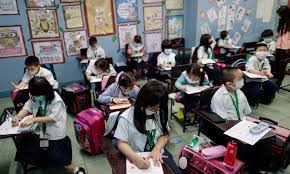 The United Nations said Wednesday that nationwide school closures in 13 countries intended to help contain the spread of the coronavirus have resulted in nearly 300 million young people being out of school.


“We are working with countries to assure the continuity of learning for all, especially disadvantaged children and youth who tend to be the hardest hit by school closures,” Audrey Azoulay, head of the U.N.’s Education and Scientific Organization (UNESCO), said in a statement.

While temporary school closures as a result of health and other crises are not new unfortunately, the global scale and speed of the current educational disruption is unparalleled and, if prolonged, could threaten the right to education,” she said.
Countries that have implemented national school shutdowns include China, where the virus outbreak began in late December, as well as Italy and Iran, which have been hard hit. Armenia, Azerbaijan, Bahrain, Hong Kong, Japan, Macao, North Korea, Iraq, Japan and Kuwait also have closed schools.


South Korea, which has been coping with one of the largest outbreaks outside of China, has implemented localized school closures. France, Germany, Pakistan, Singapore, Thailand, the United Kingdom, the United States and Vietnam have also utilized localized closures.


UNESCO said if these nine countries move to nationwide closures, it could impact an additional 180 million students.
UNESCO is convening an emergency meeting of education ministers Tuesday to discuss responses and strategies to the coronavirus outbreak. They will also look at ways to continue their education during the outbreak, including remote learning programs.
VOA