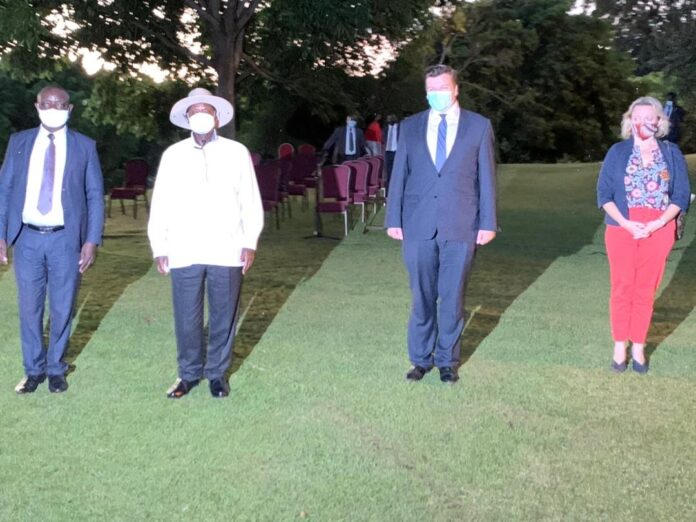 Uganda is a key ally for the UK in East Africa and during his visit Mr Heappey had the opportunity to discuss regional security issues affecting both the UK and Uganda, including the newly endorsed concept of operations for ATMIS, the need for continued progress in South Sudan as well as ongoing UK support to the UPDF.


Support to the UPDF forms part of the UK Governments regional security programme in East and Central Africa and is designed specifically to improve capacity in line with international human rights standards. Training is aimed at ensuring Ugandan officers are fully cognisant of their international responsibilities and able to act as part of regional and international peace and stabilisation forces, for example enhancing the Ugandan response to Al-Shabaab and helping to tackle the ongoing illegal wildlife trading within the region.

The Minister’s visit was also an opportunity to discuss the situation in Ukraine and counter disinformation about the illegal and unprovoked invasion of Ukraine by Russia. The UK has been unwavering in its support for Ukraine and the total offer of support to Ukraine from the UK now totals around £400m, including £220m of humanitarian aid.
The UK has been clear from the beginning that, as a free and democratic country, Ukraine has the right to determine its own future and make its own security arrangements. The UK Prime Minister has vowed to continue to work with partners to support the Ukrainian Government in the face of Russian aggression and make sure Russia cannot further undermine European stability.
Speaking about his visit, James Heappey said:


‘Historically Uganda has always been a loyal friend to the UK and it remains one of the UK’s closest allies in East Africa. Their unwavering commitment to regional security, particularly in Somalia, brings benefits that extend much further afield than just East Africa. We recognise and appreciate the key role Uganda plays across the region, and the UK will work closely with the Ugandans and their regional partners, including the East African community, to support peace and security initiatives in Somalia, South Sudan and the Eastern Democratic Republic of Congo”.

Kate Airey, British High Commissioner to Uganda added:
‘Uganda has an important role to play in reducing regional conflict and the sacrifices that Ugandan troops have made in attaining regional security are recognised and appreciated.
The UK, through our Ministry of Defence will continue to help to build the capacity of the Ugandan Peoples Defence Force (UPDF), ensuring they can respond appropriately and proportionally to potential security threats, including terrorism and emerging humanitarian crises whilst upholding international law and human rights’.