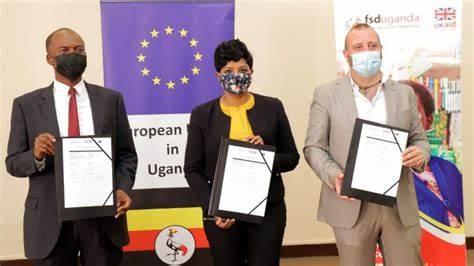 
Over this period, FSD Uganda has evolved from an overseas development assistance programme into an independent not-for-profit Ugandan organisation. Now, the next stage of evolution kicks off with the Bill and Melinda Gates Foundation becoming the new anchor donor as the UK steps down from its current funding role. Bringing the Bill and Melinda Gates foundation on board will ensure FSD continues its operations, supporting Uganda to grow its economy sustainably.

This includes a number of key successes supporting: the Uganda Central Bank in the development and implementation of the National Financial Inclusion Strategy (NFIS);

The Uganda’s first Financial Sector Development Strategy (with the World Bank), which the Ministry of Finance Planning and Economic Development is now implementing; the development of the National Payment Systems (NPS) Act and subsequent regulations & the Insurance Regulatory Authority (IRA) when developing a regulatory sandbox;

Others are: the Uganda Bankers Association in conducting a comprehensive review of all laws and regulations in Uganda to identify areas where reforms would be required to improve the banking sector’s operating environment.

Andrew Ockenden, the former Development Director, British High Commission Uganda at Foreign Commonwealth and Development Office, says:“I am proud of the work that the UK has achieved through FSD Uganda. Together we have enabled over 600,000 individuals to access finance, and supported over 4,000 micro, small and medium enterprises. This support has focussed on the most marginalised in society. The UK is proud of the institution we have established and excited about the new expertise and focus that the Gates Foundation will bring. It is a huge mark of success that FSD Uganda has attracted the wider donor support that has enabled FSD Uganda to succeed independently of the founding donor. ‘’


He adds: The UK remains fully committed to FSD Uganda and the results we know it will continue to deliver

Jason Lamb, Deputy Director at the Gates Foundation says: “The Gates Foundation recognizes FSD Uganda’s focus on marginalized and excluded citizens and micro/small enterprises and the positive impact on their lives. We are delighted to fund the next stage of their work. We would also like to recognize the UK government for its vision as the founding donor.”