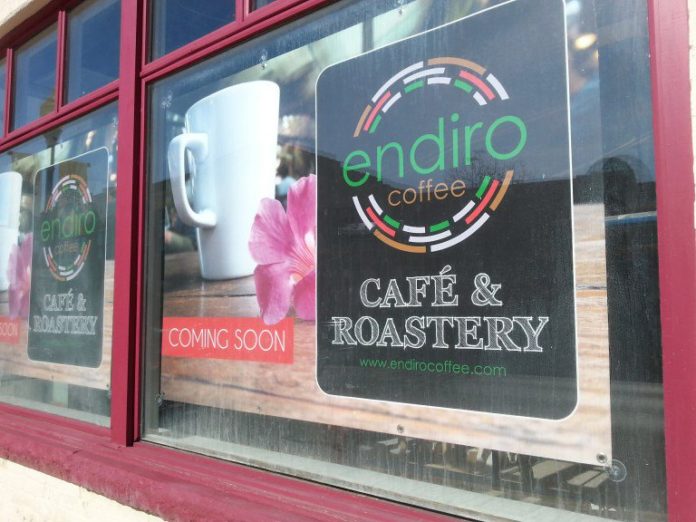 By Cody Lorance
Endiro Coffee was born as a tiny little café in the great big city of Kampala, Uganda, ready to do its part for kids in need.
What came next, however, was entirely unexpected.
Endiro quickly became popular among locals and tourists alike and the business found itself needing to grow to keep up with demand. The little café in Kampala expanded to fill the adjacent building and then began to launch new locations in other parts of the country. In 2015, Endiro opened its 4th and 5th locations amid growing popularity and launched its first coffee growing project.


Today, Endiro has established itself as one of the most popular coffee brands in Uganda and has seen its operations expand from the coffee cup all the way to the coffee tree.
Currently, some 2,000 coffee farmers – most of whom are women – are members of the Endiro Growers network and 100% of Endiro’s Ugandan coffee comes from these farmers who receive training, equipment, mentoring and the nation’s highest prices per kilogram of coffee through the partnership.


All this, of course, has allowed Endiro Coffee to do more than what they had ever imagined in partnership with others to end child vulnerability.
“We are amazed at what has been accomplished, but we know we are still at the beginning, the things we see on the horizon in the next year – in Uganda and in other parts of the world – are going to take us to another level in terms of what we can do for the sake of vulnerable children.”


In a few short weeks, the Endiro story will start yet another chapter as the company opens its first location in the United States. Just outside of the American city of Chicago lies Aurora, Illinois. There on the banks of the Fox River, Endiro is getting ready to launch a coffee shop in the heart of the city’s historic downtown district.


offee farmers continue to live in viscous circle of poverty
Aurorans, Chicagoans and even diaspora Ugandans will soon be treated to single-origin Ugandan coffee from the village of Bukalasi in Bududa, specialty grade Ugandan tea from Mityana, and even some Ugandan street food favorites such as rolex, samosas, and muchomo. In true Endiro fashion, a full breakfast, lunch and dinner menu will compliment a coffee, tea and juice menu that will be difficult to beat.
READ: Will Uganda Coffee farmers benefit from the crop failure in Brazil?
“We call our culinary style, ‘Glocal Food’ because we like to take popular dishes from around the world and put our own, distinctly Ugandan twist on it. Aurorans are going to love it!”


The Endiro Aurora location will also be a roastery, which means that all the coffee customers drink there will be roasted in house to ensure maximum freshness and flavor – and home brewers needn’t worry as they will always be able to take a bag of their favorite beans home with them along with Endiro’s signature t-shirt which proclaims boldly, “With enough coffee, I can change the world!”
Indeed, that same Endiro vision, a vision born in the soil of Uganda, will be coming to Aurora along with it’s famous coffee. Endiro’s leaders have already begun to network with local organizations that are working with children and young people in the area. Endiro’s Managing Director commented:
“Child vulnerability is not a Ugandan problem. It is not an African problem.


It is a human problem and wherever we find ourselves as a company we want to be intentionally engaging with others to ensure that every child has an opportunity to realize their God-given potential.”
In the end, Endiro is not simply a Ugandan restaurant chain launching out into the highly-competitive American marketplace. It is not just another in a long list of new wave coffee shops entering a very crowded field. Endiro is a company wholly built upon a love for children and entirely dedicated to doing whatever it can to “brew a better world” for them. It’s vision statement says it all:
“Our vision is to be a company that partners with others to end child vulnerability globally and to advance justice, peace, liberty and dignity through the utilization of coffee and its related products, profits, services and spaces.”
Cody Lorance is the director of US operations for Endiro Coffee. He also takes on the titles of corporate executive chef and brand manager.

RELATED:Uganda seeks to feed the world through the new Fertilizer Policy