A letter to all those who call me “Maama” by choice (II). read first letter here

My prayer devotional today reads,” There is an alternative.” This is the title the author used to introduce this very important and thought provoking instruction. He says, “When people say there are no employment opportunities, I beg to differ. What people refer to as unemployment is the lack of the particular jobs they want.”

He goes on to elaborate on this saying,” Such people fail to diversify the scope of labor they are willing to engage in, and so they keep looking for white collar jobs when there are other types of jobs that can provide for their needs. Unfortunately, they consider such jobs to be beneath their status as graduates or professionals and hence remain unemployed.”
I agree with the author’s point of view because I know many young people who suffer looking for jobs in this country and do not consider the opportunities that are available to them. Especially since most of our families in Uganda live on the land and subsist on what their land produces.


The author goes on to site the scripture Genesis 26:1-14, which tells the story of Isaac the son of Abraham, who lived on the land and fed his family on what he produced from the land. The Bible brings us this classic story of Isaac sowing seed during a time of famine and reaping a hundred-fold return in the same year, and God blessed him. The man prospered greatly until his neighbors envied him.


In Uganda, we know that this is possible because we read the success stories in the newspapers of the many farmers who are prospering from the fruit of their land and the commercialization of farming.
In fact, many children have their tuition fees paid by parents who are farmers, raising crops or animals and selling them for profit. From this income, they have built homes, paid their children’s education and live a decent life.


The parents educate their children in the hope that they will better and grow the income of the family using the knowledge and skills they have gained in school. However, today we are seeing the trend of young people running away from the land, opting to live on the streets and begging for their daily meals.
The author of the devotional continues and narrates the story of two young men who went to see a seer or a prophet to ask him what their future held in store.


To the first young man whom we shall call John went to the seer and the seer said to him, “You will be a king in future if….” Before he could finish, John jumped up excitedly and ran off fully convinced that his fate was sealed.
Then he spoke to the second young man whom we shall call James and said, “You will die poor unless….” Again the young man stormed out this time in anger because of what he felt was a negative prophecy.


John who thought his destiny to become king was a sure thing, began to live a life of ease and laziness. He boasted to others that he didn’t need to work hard because he was going to be king. James on the other hand, after simmering down, made a decision that he wasn’t going to die poor. So he went into the jungle with his farming tools and started transforming the jungle into a garden with food production.
After a while, his farm became so prosperous and people from the city depended on him to supply them with food. It w

asn’t easy but with hard work and dedication, James got out of poverty and started prospering.

In the course of time, the king of the land died and there was widespread famine. The people desperate for survival, all gathered together and came to James and begged him to become their king. The people saw the wisdom that James possessed and how he had always come through for them when they needed him. They saw in him the right qualities of a leader. So it was James in the end who became king and John who had wasted his years, eventually died a pauper.


The seer’s prophecy was fulfilled for both young men. This shows us that in our lives, all things are possible, if we will apply ourselves diligently to whatever we have, however small the beginning might seem. In the end we are the ones who write our own story.
In African culture, there are many such stories, told to children and young people in order to inculcate in them a desire for hard work and diligence. Hard work has dignity and it is something that we as a society must celebrate and esteem. Laziness is a curse and it is an attitude we must reject as families, parents and children.


In the book of Proverbs 24:30-34, It says, “I went by the field of the lazy man and the vineyard of the man devoid of understanding. And it was overgrown with thorns, its surface was covered with thorns and its stone wall was broken down. I looked on and received instruction; a little sleep, a little slumber, a little folding of the hands to rest. So shall poverty come like a prowler, and your need like an armed man.”


Therefore, my beloved children, my prayer for you is that you will make a quality decision, when you are still young and there is still time to reject laziness and the spirit of entitlement. Do not fall into that trap of feeling that the world owes you something and your livelihood is someone else’s responsibility. In Uganda, we have two growing cycles, where almost every food crop can grow and thrive because of our mild climate and good rainfall.


If like the example in the story, you are willing to try, then you will see the fruits of your diligence. The NRM government has a number of good programs in place, especially to support young people who are determined not to remain poor.

I implore you to tap into the help and support that is available and do your part as well. Do not give up even though life and work is hard. If you are diligent and persevere, you will succeed.
God bless you.

read: Janet Museveni to the corrupt govt. Officials: GOD IS WATCHING YOU 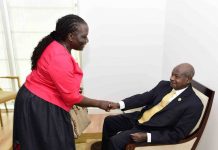 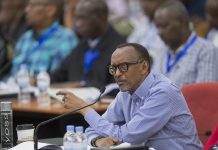 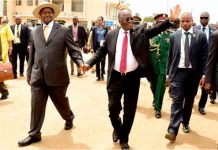