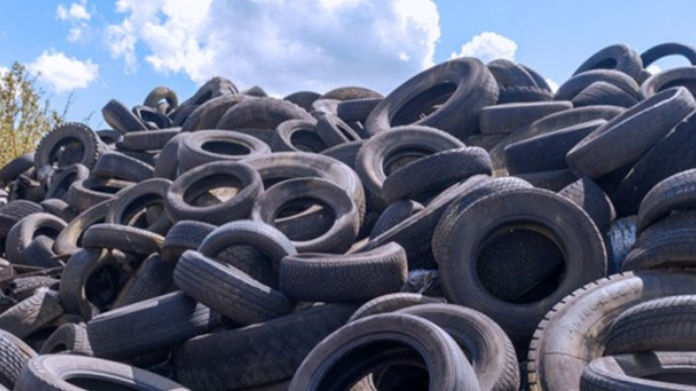 Stockpiles of old, discarded tires are becoming a common sight in Kampala. Some are disposed of by burning while others are taken to landfills, a phenomenon environmentalists say is detrimental.

Eric Rugomoka, a youth in Kivulu, a slum area on the outskirts of Kampala, is determined to change the situation.


Rugomoka dropped out of school eight years ago, and followed his passion, art. He sayst when he was still in school, he loved art and that explains why when he dropped out of school he chose it as his source of livelihood.
Rugomoka saw the poor disposal of discarded tires as an opportunity to turn waste into money, while at the same time protecting the environment.
At his makeshift workshop in Kivulu, Rugomoka collects discarded tires from fuel refilling stations, car garages and landfills. Some people even bring the tires to him at a small fee.
Using sharp instruments, with the help of other youths cut the tires, Rugomoka crafted them into car carpets, sandals, gym mats among others. These products are then supplied to shops.
Rugomoka said besides making money, removing the discarded tires from communities, protects the locals from getting malaria. Malaria causing mosquitoes breed in stagnant water that piles up in the tires. According to ministry of health, apart from malaria being a killer disease, especially for children and pregnant mothers, the disease also consumes family incomes due to treatment costs.

Uganda’s state-run environmental watchdog, National Environment Management Authority (NEMA), said actions by Rugomoka and many other youths in the capital who have ventured into recycling discarded tires are noble.
Naomi Karekaho, NEMA’s communications officer told Xinhua that discarded tires are part of a wider plastic disposal waste management challenge that the country is facing.
Karekaho said any effort made to save the environment from such waste is a welcome move.
“The approach has been if they are no longer useful on the car, they are useful in many other ways. The principle is delay the rate at which a certain product becomes waste and therefore ends up in the environment, and tires are one of those items that take a long time to become waste,” she said.
She said the immediate problem of tires is when micro plastics come off them on the roads or when they are poorly discarded. These plastics are easily washed into rivers or lakes when it rains.


“When they are washed into water bodies, it is possible that aquatic biodiversity like fish consume them and they end up into the human body. It is dangerous to have plastic in our body, it is a potential cause for cancer,” Karekaho said.
The country, according to Karekaho, has received support from the United Nations Environment Program (UNEP) to improve disposal of plastic waste and plastic pollution.
“We will be able for the first time to generate statistics that ae specific to Uganda plastics from land to sea. We will be able to know how much is on land, where did it come from, what is the biggest constituency of plastic waste and then determine how best to manage them,” Karekaho said.