Home Business Ugandan woman arrested at Delhi airport with one kilogram of cocaine in... 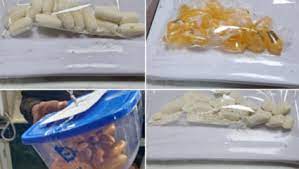 A Ugandan woman was arrested at Delhi airport allegedly with around one kilogram of cocaine in her stomach, said a senior Customs official
The official said that the woman was admitted to RML hospital and it took four days for recovery of all 91 cocaine-filled capsules from her body. A total of 993 grams of cocaine has been recovered.
“It is a rare case where around one kg has been concealed inside the body in specially designed pellets containing cocaine.


In normal cases, these drug carriers conceal around 400-500 grams inside their body. It could be life-threatening if these capsules burst inside the stomach,” he said.

He added that Customs officers identified one Ugandan passenger, who arrived at Terminal-3 of IGI Airport a few days back.

The gait and body movements of the passenger were unusual. The customs officer out of sheer facilitation and goodwill approached her if she needed any help.

However, the passenger not only refused to accept any help but also showed a disinclination to engage in any conversation, while at the same time continuing to exhibit uneasy body movements.


“Sensing the unusual behaviour of the passenger, the Customs officers maintained a vigil on her. After a while, the passenger crossed the green channel and was approaching towards exit gate of the international arrival hall, when the customs officers finally intercepted her,” he said.

Upon questioning, the passenger finally divulged that she had swallowed 91 capsules of narcotic substance.

Since it was an impending emergency, the passenger was admitted to the RML Hospital.

X-ray scanning revealed that the colon (ascending, descending) Sigmoid etc of the passenger was filled with oval pellets, he said.

Under expert medical supervision, an ejection procedure was carried out which yielded the recovery of a total of 91 pellets in batches.


The entire ejection process lasted over several days during which Customs staff maintained round the clock vigil at the hospital, he added.

“These 91 pellets, in turn, yielded 992 grams of a white powdery substance, Diagnostic test, revealed the substance to contain cocaine. The hospital authorities handed over the passenger to the Customs,” he said.


The passenger was arrested under NDPS Act on Wednesday. Further investigation in the matter is under process.