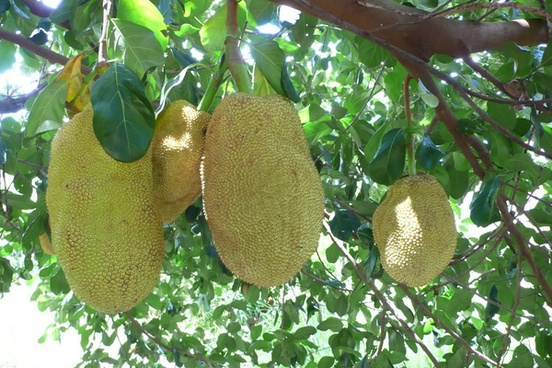 In many homesteads in central Uganda, jackfruit trees are common in gardens. When the day’s meal is late, children, especially in rural areas, resort to eating the ripe fruit as they wait. Sometimes, extra jackfruits are given to animals as feed.
With changing times, farmers have started looking at jackfruits as a source of income.
In Namaliga village, Buikwe district, Tadeo Mayega and his sister Margaret Nanyonjo carefully handpicked unripe fruits from jackfruit trees in their gardens. Their home is a collection center for the harvested jackfruits in the village before they are transported to a food processing company.
Some kilometers away in Bukuju village in the central district of Kayunga, Christopher Mwanje is another farmer who takes pride in selling young or unripe jackfruits.


Mwanje said trade in the fruit has provided incremental income to his household. He says out of the proceeds from jackfruits and other crops in his four-acre garden, he has been able to take care of his family and can afford to take his children to school.
Mayega, Nanyonjo and Mwanje are among the 293 farmers in 10 districts that sell young jackfruits to Zahra Food Industries Limited, a local agro-processing company.

At Zahra’s processing plant, jackfruits are again sorted to ensure they meet the required standards. Then, the fruits are processed before the dry fiber is packed and shipped to Europe, according to Quresh Fidahusein, the founder and director of the company.

Fidahusein said the dried jackfruit fiber is mostly exported to the Netherlands, where food companies can make ready-to-eat vegan products like plant-based meatballs and burgers.

He noted that while Europe has stringent certification procedures to access its market, African companies are striving to measure up.


“Europe is a fascinating market for plant-based products like these,” he said, noting that there is also increasing interest from other parts of the world at a time when demand for meat alternatives continues to rise.

Consumers are moving into a plant-based diet because of several factors related to environment, health or religion, he said.
Fidahusein also said because of environmental concerns, there is an increasing preference for jackfruits as a plant-based protein compared to soy.


“Soy is currently getting a bad reputation for development, as more soy fields come about, the more deforestation has to happen to make room for plantations; while the more we promote the consumption of jackfruit, the more trees go up,” he added.