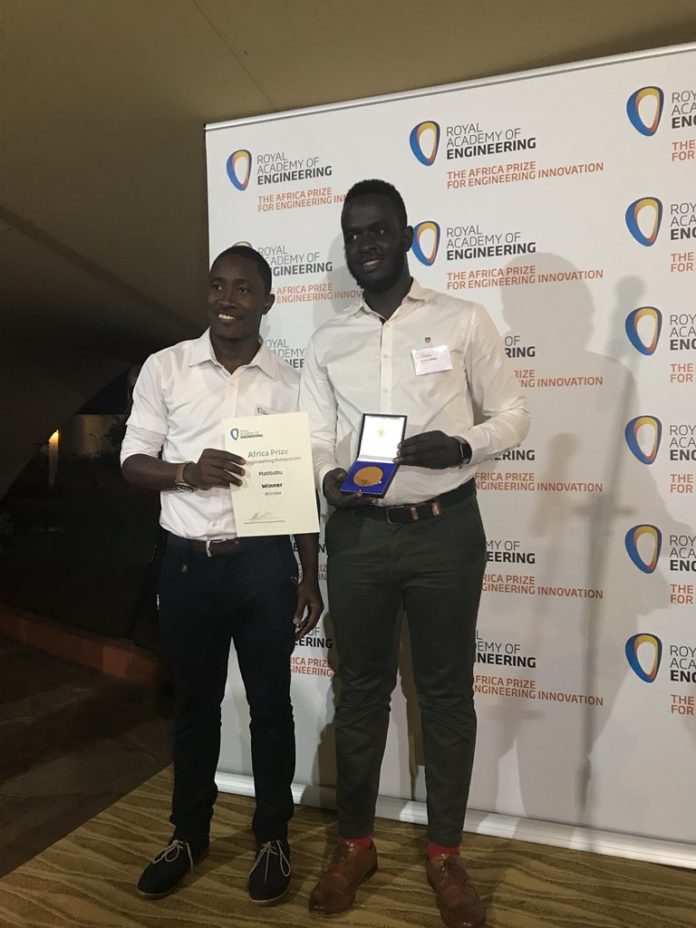 A 24-year-old Ugandan software engineer has won the Africa Prize for Engineering Innovation. Brian Gitta is the first Ugandan to win the prestigious Africa Prize, and the youngest winner to date.


Gitta and his team developed Matibabu, a device which tests for malaria without drawing blood. Matibabu, which means ‘medical centre’ in Swahili, is a low-cost, reusable device that clips onto a patient’s finger, requiring no specialist expertise to operate. The results are available within one minute on a mobile phone that is linked to the device.
A red beam of light shone through the user’s finger detects changes in the shape, colour and concentration of red blood cells, all of which are affected by malaria.

Gitta wins the first prize of UK £25,000 (124 million Ugandan shillings). At an awards ceremony in Nairobi, Kenya on 13 June 2018, four finalists from across sub-Saharan Africa delivered presentations, before Africa Prize judges and a live audience voted for the most promising engineering innovation.
The Africa Prize for Engineering Innovation, founded by the Royal Academy of Engineering in the UK, is Africa’s biggest prize dedicated to engineering innovation. It encourages talented sub-Saharan African engineers, from all disciplines, to develop innovations that address crucial problems in their communities in a new, appropriate way.


Gitta and his team decided to develop the device after missing lectures, having had malaria several times. Matibabu is currently undergoing testing in partnership with a national hospital in Uganda, and is sourcing suppliers for the sensitive magnetic and laser components required to scale up production.
Matibabu is aimed at individuals, health centres and diagnostic suppliers. The team also aims to set up the device on the streets to allow people to do a single test at a time.
Through their participation in the Africa Prize, the Matibabu team have been approached by international researchers offering support and are currently writing up their ground-breaking findings into an academic paper, to be published within the next few months.


“We are very proud of this year’s winner. It’s a perfect example of how engineering can unlock development – in this case by improving healthcare,” said Rebecca Enonchong, Africa Prize judge. “Matibabu is simply a gamechanger.”
Sixteen shortlisted Africa Prize entrants, from seven countries in sub-Saharan Africa, received six months training and mentoring during which they learned to develop business plans and market their innovations. The group received coaching on communicating effectively, focusing on customers and approaching investors with confidence.
The Africa Prize provides a unique package of support, including funding, comprehensive business training, bespoke mentoring and access to the Royal Academy of Engineering’s network of high profile, experienced engineers and experts, and their networks.


It helps turn engineers with incredible ideas into successful entrepreneurs.
Launched in 2014, the Prize aims to stimulate, celebrate and reward engineers who have developed innovations that will benefit Africans.
The three runners up, who each win £10,000, are:
Collins Saguru, a Zimbabwean working in South Africa, for AltMet, a low-cost, environmentally friendly method for recovering precious metals from car parts


Ifediora Ugochukwu from Nigeria for iMeter, an intelligent metering system that gives Nigerian users transparency and control over their electricity supply
Michael Asante-Afrifa, from Ghana for Science Set, a mini science lab that contains specially developed materials for experiments


Gitta commented: “We are incredibly honoured to win the Africa Prize – it’s such a big achievement for us, because it means that we can better manage production in order to scale clinical trials and prove ourselves to regulators. The recognition will help us open up partnership opportunities – which is what we need most at the moment.”