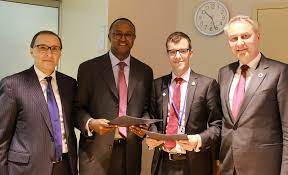 Emmanuel Nyirikindi has been appointed Vice President of International Finance Corporation (IFC) the private sector arm of the World Bank Group.
He’s the first Ugandan to hold the job

The appointment was announced in a statement made by World Bank Group president David Malpass.

“He has more than 14 years of IFC experience, working mainly across infrastructure development…he brings more than 25 years of experience in infrastructure and private sector development, including his pre-IFC career leading Uganda’s infrastructure reform programme in the ministry of Finance,” Mr Malpass said.
Mr Nyirinkindi holds a Master’s Degree in Business from the University of Kansas and a Bachelor of Commerce from Makerere University. Mr Jim Mugunga, the spokesperson of the ministry of Finance, said Mr Nyirinkindi’s appointment is an endorsement for locally bred capabilities and professionals.
Until recently, he was the Director Transaction Advisory Services at the International Finance Corporation (IFC), World Bank Group.


Mr. Nyirinkindi joined IFC in 2006 as a Senior Investment Officer in IFC Johannesburg Office. He was the Global Head of IFC’s Public-Private Partnerships Advisory Services prior to his current position.
Over the past decade, Mr. Nyirinkindi has established a strong record of leadership and execution in advising governments in designing and bringing to market commercially robust PPP projects that provide high quality, affordable and efficient infrastructure and social services to the public across a variety of sectors.