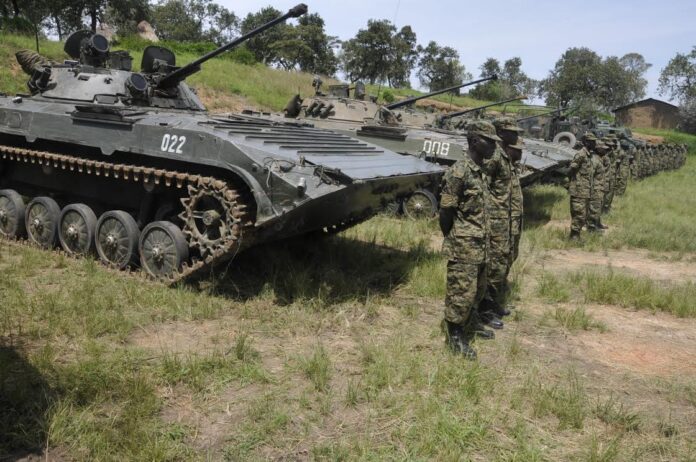 Uganda has tripled military spending over the last five years to catch up with Kenya from the $346.7 in 2017 compared to Kenya’s $1.015 in the same year- according to new data on global military spending published by the Stockholm International Peace Research Institute (SIPRI).


Kenya is an economic power house in the region with a GDP of $100 billion followed by Tanzania at $55 billion and Uganda at $32 billion.
“Over the decade 2012–21, Kenya and Uganda have both faced insurgencies that have influenced their military spending. Between 2012 and 2021, military expenditure rose by 203 percent in Uganda but remained relatively stable in Kenya,” SIPRI said in the trends in world military expenditure, 2021.
In 2021 Kenya, Uganda and Angola were, respectively, the third, fourth and fifth largest military spenders in sub-Saharan Africa.
Uganda and the Democratic Republic of Congo are currently undertaking a joint military operation in eastern DR Congo against the Islamic States-affiliated group, Allied Democratic Forces (ADF).

US military spending amounted to $801 billion in 2021, a drop of 1.4 per cent from 2020. The US military burden decreased slightly from 3.7 per cent of GDP in 2020 to 3.5 per cent in 2021.
US funding for military research and development (R&D) rose by 24 per cent between 2012 and 2021, while arms procurement funding fell by 6.4 per cent over the same period. In 2021 spending on both decreased. However, the drop in R&D spending (–1.2 per cent) was smaller than that in arms procurement spending (–5.4 per cent).
‘The increase in R&D spending over the decade 2012–21 suggests that the United States is focusing more on next-generation technologies,’ said Alexandra Marksteiner, Researcher with SIPRI’s Military Expenditure and Arms Production Programme. ‘The US Government has repeatedly stressed the need to preserve the US military’s technological edge over strategic competitors.’

In 2021 Iran’s military budget increased for the first time in four years, to $24.6 billion. Funding for the Islamic Revolutionary Guard Corps continued to grow in 2021—by 14 per cent compared with 2020—and accounted for 34 per cent of Iran’s total military spending.
Eight European North Atlantic Treaty Organization (NATO) members reached the Alliance’s target of spending 2 per cent or more of GDP on their armed forces in 2021.


India’s military spending of $76.6 billion ranked third highest in the world. This was up by 0.9 per cent from 2020 and by 33 per cent from 2012. In a push to strengthen the indigenous arms industry, 64 per cent of capital outlays in the military budget of 2021 were earmarked for acquisitions of domestically produced arms.