Home Business Uganda secures site for nuclear power plant in Buyende- ‘’ we are... 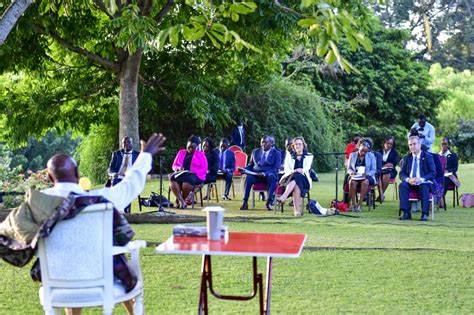 The only atomic power station in Africa is situated near Cape Town in South Africa, while Kenya and Nigeria have plans to construct nuclear power plants.


The visiting IAEA’s director in charge of Nuclear Power for Africa, told President Museveni Monday that IAEA has come up with recommendations for the country to start building and production of nuclear power- According to a State House statement issued by, Aline Des Cloizeaux

“For us, we want that power for electricity, for agriculture and not for nuclear weapons,” he said after receiving a report from IAEA.
Uganda, which largely depends on hydro-electric power, plans to boost electricity generation capacity to 17,000 megawatts in the medium term, according to the Electricity Regulatory Authority. In 2017 government said that it planned to build a 2,000 megawatt nuclear power plant by 2032.


“(I) am glad that you are satisfied, that we are doing what is required,” Museveni said, adding that the reason Uganda is going for nuclear energy is that the hydropower sources are not sufficient.

Uganda has so far trained 22 people at the level of master’s degree in nuclear science. A school is soon to be set up to train lower cadres in the field of atomic energy, according to the ministry of energy.

Sidronius Opolot Okasai, the minister of State for Energy, said Uganda has adopted the IAEA phased approach for the development of national infrastructure for nuclear power.
The approach consists of three phases: phase one, understanding commitments, obligations and resource requirements before embarking on nuclear power project.