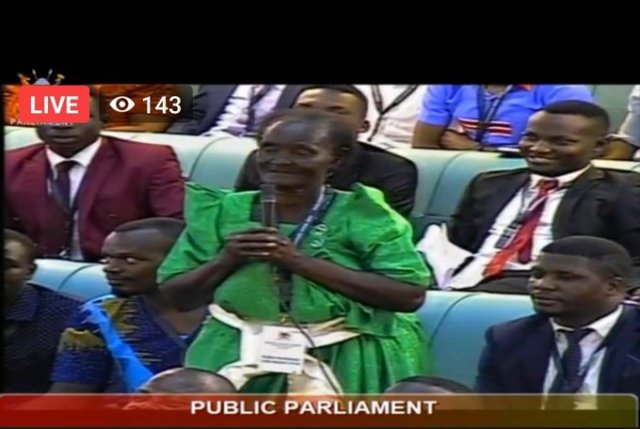 Members of the Public have called for strengthened democratic practices in the country, saying that Uganda is still far from attaining a democratic status.


This was during the Public Parliament held last week under the theme, ‘Parliament: Building a strong democracy in Uganda’.

The event is part of the annual Parliament Week activities which gives members of the public an opportunity to become MPs for a day.


The members elected their Speaker, Leaders of the Majority and the Minority. Expedito Mutesasira was the Speaker while Ismail Kawooya and Francis Nabassa were elected Leader of Majority and Leader of Minority respectively.

The debate was premised on a motion to commend government for building a strong democracy in Uganda. Umar Ahmed from Nakawa division said that whilst Uganda enjoys a small percentage of democracy, it is still weak.


“Political parties have varied privileges. Some are accorded space and time to carry out their activities, while others are not. We need a leveled ground for all and once this is achieved, then we can say there is democracy,” he said.

Robert Wachemba from Mbale called for strengthened rule of law and tolerance if democracy is to prevail. “The law is violated everyday by those who are supposed to uphold it. We see how some of our MPs are treated; they cannot speak on radio, they cannot move freely. Is that democracy?” Wachemba said.


Francis Nabasa from Kitagwenda who was the day’s Leader of the minority faulted government on the registration exercise of learners in 2017 by the National Identification Registration Authority (NIRA), saying that many have been left out, thereby denying them the right to vote.

“Imagine in my area, there were only two computers. How many people can they register in a day? I am afraid many will not be able to vote because they were not registered,” he said.
The Leader of the minority, Ismail Kawooya however, commended government saying that Uganda has transitioned from a non-democratic state in the 1970s to a democratic state.


“People have the power to elect new leaders after every five years. The country has a fully functional judiciary. Freedom of speech is at a high level compared to the regime of former president, Idi Amin Dada. These are true characteristics of democracy,” he said.

Anitah Mutesi of Mbarara Municipality applauded government for ensuring that there is increased involvement of women in politics through Woman MPs.


“We have witnessed women emancipation. In every district we have a position of a woman MP; this was not the case many years ago,” she said. The session was attended by Inter-Parliamentary Union (IPU) President, Gabriela Cuevas who hailed Parliament for having “a truly open door policy”.

Cuevas said parliamentary diplomacy is key in strengthening cooperation among nations and in building a coalition to confront global challenges. “We need to cooperate in terms of fighting sicknesses and diseases; for example fighting poverty, climate change and other such challenges,” she said.


The Leader of the Opposition in Parliament, Hon Betty Aol Ocan encouraged the ‘MPs’ to take inspiration from their roles and seek to occupy public office.

Aol Ocan said it is upon the youth to take interest in strengthening democracy, saying Uganda’s journey to complete freedom is still long.


“It [Uganda’s democracy] is not promising as of now; it is a little hard, but you are on the right track to correct the course,” she said.

Resolutions of the Public Parliament and the Hansard are transmitted to Speaker who then forwards the Parliament for consideration.