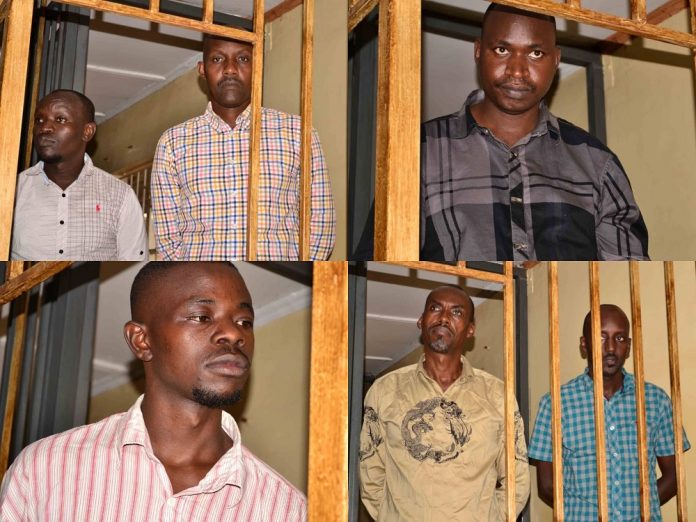 The General Court Martial in Kampala on Tuesday dropped espionage charges against 07 Rwandan nationals. They will be handed back to Rwanda


President Museveni recently assured Ugandans that the tension between once brotherly countries; Uganda and Rwanda will end very soon. ‘ ‘I can guarantee, Uganda will do its share of the normalization of the relations between our two countries.’’ He said.

The seven suspects are Rene Rutagungira, Bahati Mugenga, Emmanuel Rwamuco, Augustine Rutisiri, Etienne Nsanzabahizi, Charles Byaruhanga, and Claude Iyakaleme
The court presided over by Lt General Andrew Gutti endorsed the withdrawal of the charges of unlawful possession of firearms, ammunition and military uniforms against them.


Prosecutors Lt. Col Raphael Mugisha and Capt. Ambrose Baguma tendered before court withdraw letters indicating that the state has lost interest in the case hence the withdrawal of the charges.
“This court hereby sets you free unless if you are held on other lawful charges,” held Lt. Gen. Gutti. He, however, pointed out that the withdrawal charges can be reinstated at any time.


The lawyer of the 07 suspects Eron Kiiza told journalists that the release followed latest diplomatic efforts between Kampala and Kigali to resolve the tensions between the two brotherly countries.
The accused persons were charged before the army court in 2018 on separate files of unlawful possession of firearms and ammunition.


According to the court documents, Lyakeremye, a boda boda rider was arrested from Old Kampala while Rutagungira and Mugenga, Congolese national were jointly charged with senior police officers over alleged unlawful possession of four grenades and kidnap of former bodyguard to Rwandan President Paul Kagame in 2013.


The prosecution alleged that Rene used a pistol and grenades to abduct Lt Joel Mutabazi and Jackson Kalemera, both former Bodyguards to the Rwandan President Paul Kagame.
The charge sheet also indicates that Rene alongside some Ugandan Police officers in a cunning move transferred the abductees to Rwanda.