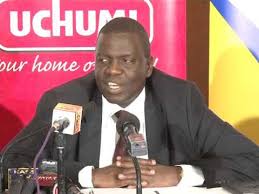 
Uchumi Supermarkets has announced the resignation of its chief executive officer, Dr Julius Kipng’etich, from the company effective end of November.
The struggling retailer said in a statement posted on its Twitter page that it had reluctantly accepted a resignation letter from Kipng’etich “to pursue personal interests”.


“The Board of Directors has commenced the process of identifying a suitably qualified successor to the Chief Executive Officer and will, in due course, unveil the identified successor,” Uchumi said in the statement.
Kipng’etich, whose two-year contract expired in October, joined Uchumi from Equity Group in August 2015 after its former chief executive, Jonathan Ciano, was fired along with three other managers for mismanagement.


He served as the chief executive officer of Kenya Wildlife Service before joining Equity Group.
Uchumi has posted a series of losses in the last three years as it struggled to turn around after it fell into receivership in mid-2006 following a botched expansion plan.
It was lifted from receivership in January 2008 after it received a bailout loan worth Sh675 million from its main shareholder the government.