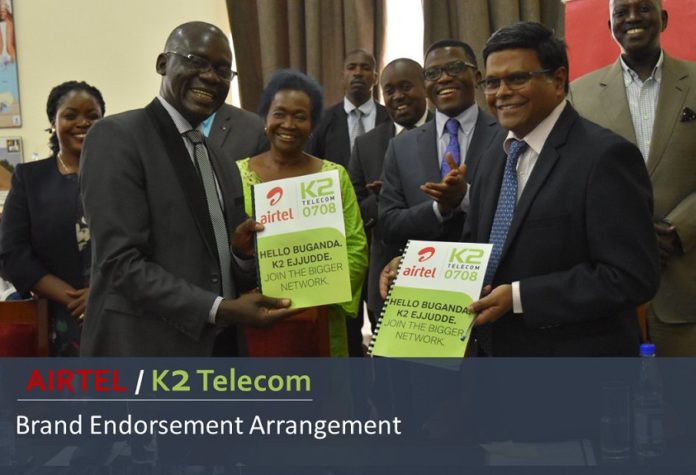 
Owned by Buganda Kingdom, K2 telecom major shareholders include former Finance Minister Maria Kiwanuka and Buganda Land Board boss, Kiwalabye Male. K2 was launched by Kabaka Ronald Mutebi in December 2013. However since its launch, the company has been struggling, with less than 100,000 active customers
Following the brand endorsement, K2 also ditched 0730 code for 0708. This means they will need new simcards. The development means the two telecoms will share a percentage of revenues from K2 operations.

Is UCC okay with this transaction?
According to Ibrahim Bbossa, the UCC’s Manager Consumer Affairs ‘‘As a regulator of the communication sector, UCC, is always available to support its licensees in coming up with any innovative ways through which communication services are offered in the country.’’


He added: K2 telecom will remain the sole and exclusive owner of the K2 Trademark and Brand. In the marketing of K2’s telecom Products and Services, Airtel will be free to state that the K2 Trademark and Brand is “powered by Airtel”
Airtel has had a long history with the Buganda kingdom having been active sponsors of different activities such as the annual Kabaka Run and Masaza Cup, among others.


The K2 was closed down by Uganda Revenue Authority in May, over failure to remit taxes of close to Ugx. 95 million.
At a press conference held in Bulange, Mengo, , Airtel Managing Director VG Somasekhar and the Katikkiro of Buganda Charles Peter Mayiga heaped praises on the future prospects of the partnership which they said was successful given their working history.


Godfrey Kisekka, the K2 chief executive officer told journalist in Kampala that, K2, had given itself a target to grow subscriber numbers to at least one million in the next six months. K2 was previously hosted by Africell, before shifting to Smart Telecom after the two telecoms disagreed over pricing of services.