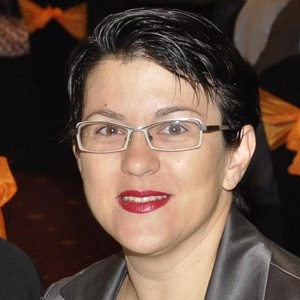 Nada Andersen has been appointed Head of state owned Uganda Broadcasting Corporation (UBC) TV. Andersen, a Serb from Trebinje in southern Bosnia Andersen is however a Ugandan citizen and has lived in the country for over 15 years.
‘ ‘It’s a bit overwhelming, the encouragement is great and I hope my term at UBC tv as the interim UBC TV in charge will cause enough disruption to reform what you see on TV screens. Now, all hands are welcome so let’s drive ideas together for Uganda.’’ Andersen who described herself as Smuggler of optimism into Uganda tweeted.


Meanwhile UBC veteran employee Jane Kasumba has been dropped as TV manager and appointed Head of Communication UBC.
Kasumba has been head of UBC TV since 2014 after she was elevated from the public relations and communications Manager job-a role she had held for a couple of years

Apparently, Andersen is a technical expert on the ICT ministry revamp team for the national
This UBC revamp team was in September last year appointed by ICT and National Guidance minister Frank Tumwebaze to streamline human resource and TV programming at the country’s national broadcaster.
Probe report
The UBC revamp team follows damning findings by a committee appointed by Tumwebaze to investigate the ills at the national broadcaster in 2016. The report, among other things established that UBC was battling debt, operated in breach of laws and flouted best corporate governance practices.


The seven-man committee chaired by Dr Peter Mwesige, the executive director of African Center for Media Excellency recommended an urgent overhaul of the national broadcaster.
The committee also found that UBC remunerated its staff poorly; defaulted on remitting their pension contributions; most employees lacked employment contracts; while some board members lacked required skills to provide effective oversight.
Contracts of all UBC staff including the team from revamp committee have been renewed for another 3 months until April 2018.


The other changes
in the other changes,Doreen Ndeezi, who has been transferred from head of programming to manage all UBC radios.
Tonny Owana is now Head of UBC Archives, while Bert Kakooza will revamp TV newsroom and Ibra Mugwanya is now content quality controller. Ismail Kigozi is back to head Kiswahili desk.


Who is Nada Andersen?

Until her appointment as UBC head, Nada was working as Technical Expert on MoICT Revamp Team for UBC TV
She was tasked with evaluation, analysis and recommendations in areas of Programming and Commercial. Her work on a daily basis entails embedding sustainable change in internal processes and structures that will result in overall change of the organisation and specifically in the look, feel and broadcast content of UBC TV. Her Core focus was to, in a sustainable manner, change programming bias towards education and information dissemination delivered in a positive and optimistic, inspiring way.


May last year, she was elected Chairman, Uganda Advertising Association. She is also Chairman of the Provisional Board of Directors= Media Reeach Foundation of Uganda. A post she has held since July 2016.


read: Anarchy at UBC tv; Employees not paid for months, managers fighting each other for favours

Nada is also Director of Star Leo Advertising agency, one of prisoner advertising Agencies in Uganda