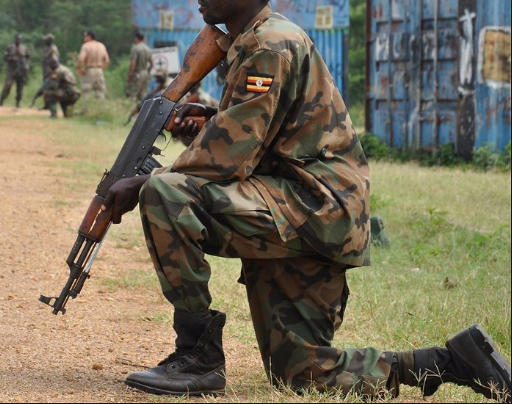 Two Ugandan People’s Defense Force (UPDF) soldiers serving under the African Union Mission in Somalia (AMISOM) have been sentenced to death and three others to 39 years in jail for the deaths of civilians.
“A Ugandan military tribunal sitting in Mogadishu has found the two officers guilty of intentionally killing civilians near Golweyne neighborhood of Somalia’s Lower Shabelle region in August this year, and three others were sentenced to jail terms for their role in the crime,” Somalia’s justice minister, Abdulkadir Mohamed Nur, said


“This sentence would be a lesson for the AMISOM mission that none of its soldiers would escape with murdering Somali civilians,” Nur said.
The incident occurred on August 10, when Ugandan forces patrolling the main supply route between Beldamin and Golweyn villages opened fire on civilians at a farm about 120 kilometers southwest of Mogadishu, according to local officials and an Amisom statement.
Relatives and eyewitnesses accused the Amisom soldiers of placing the bodies of some of the victims on remotely controlled mines before they were detonated, triggering local anger and protests in Mogadishu.

At the time, AMISOM reported that its forces were dislodging an impending al-Shabab ambush.
AMISOM forces admitted last month, though, that its peacekeepers unlawfully killed seven civilians during a gunfight between the mission’s troops and al-Qaida-linked al-Shabab fighters, promising that the soldiers responsible would be held accountable.
The court proceedings had been running since October 5 at the heavily guarded Halane camp near Mogadishu’s main airport, where the U.N. and Amisom headquarters in Somalia are located.
Some of the relatives of victims and representatives of the Lower Shabelle farmers had attended the proceedings, and they were present at the court as the sentences were announced Saturday.


A spokesman for the relatives, Hussein Osman Wasuge, told local media outside the court they were happy with the verdict.
“Even though there were no lawyers to represent us, one of us and six Ugandan soldiers were allowed to testify against the alleged soldiers for two days,” said Wasuge. “We are very happy with the court decision and expect compensation to be awarded to the families of those killed.”
Ugandan soldiers are based in the capital, Mogadishu, and the Lower Shabelle region, where they face frequent attacks and ambushes by the al-Shabab militant group.
VOA