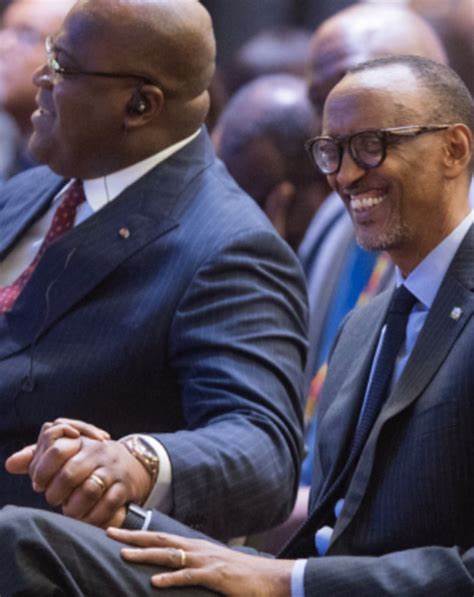 Yesterday, the Government of the Democratic Republic of Congo considered the potential suspension of all bi-lateral agreements with the Government of Rwanda, following an extraordinary meeting of the Security Council that included the Presidents of both Chambers of Parliament and the Heads of National Security.
“M23 terrorists backed by Rwanda have occupied and pillaged the city of Bunagana in the territory of Rutshuru, province of Nord-Kivu, killing young children and forcing hundreds to flee in terror. The security situation in the East of the country continues to deteriorate, and fundamentally because Rwanda seeks to occupy our land, rich in gold, coltan and cobalt, for their own exploitation and profit. This is an economic war for the battle of resources, fought by Rwanda’s terrorist gangs.” said President Felix Tshisekedi.


President Felix Tshisekedi called on all international leaders to support the DRC, and pressure the Rwandan leader Paul Kagame to end all violence towards Congo and recall their military troops which have invaded the eastern territory of Congo, and caused deaths, refugees, and war crimes against women in particular.
The security situation in the East of the country continues to deteriorate, and fundamentally because Rwanda seeks to occupy our land, rich in gold, coltan and cobalt
“We have the right to demand that our neighbours respect our territory. The people of DRC want peace, seek security in their homeland. Eastern Congolese civilians are innocents under brutal attack from our neighbour. We ask our international partners, in Africa, the US and especially the UK to condemn this invasion, and pressure Rwanda to withdraw its troops from our land. Given the UK’s recent $150 Million immigration deal struck with Rwanda, we hope that Prime Minister Boris Johnson will be able to leverage his influence.”, said President Felix Tshisekedi.
In his opening speech to Congo’s political representatives and civil society on 9 June, King Philippe of Belgium underlined “the preservation of the territorial integrity of the Congo is a major concern” shared by Belgium.


Alexander De Croo, the Prime Minister of Belgium, also stated during the Royal visit that “Each country has the right to defend the integrity of its territory” and that Belgium was ready to play a role in bringing stability and peace to Eastern Congo, where attacks from the M23 rebel group, backed by Rwanda, have escalated in recent weeks. The United Nations Security Council called in May for foreign armed groups to disarm and return to their own countries. The African Union has called for dialogue.
The Government of DRC said it welcomes the proposal made yesterday by President of Kenya, Uhuru Kenyatta, of deploying a new regional military force led by the East African Community (EAC) to enforce peace in the provinces targeted by M23 and Rwanda, but insist they will not accept the participation of Rwanda in this joint force.

The President of the Republic of Rwanda, Paul Kagame, is the host of the upcoming CHOGM 2022, the Commonwealth Heads of Government Meeting, which will meet in Kigali, Rwanda on 20-26 June. Due to the pandemic, it is four years since the last bi-annual CHOGM was held, in London, and over a decade since a CHOGM meeting was held in Africa.
“Next week’s meeting of Commonwealth leaders in Kigali is a prime opportunity for Prime Minister Johnson to lead Rwanda towards the path to peace and stability between neighbours.” urged Prime Minister Sama Lukonde Kyenge.