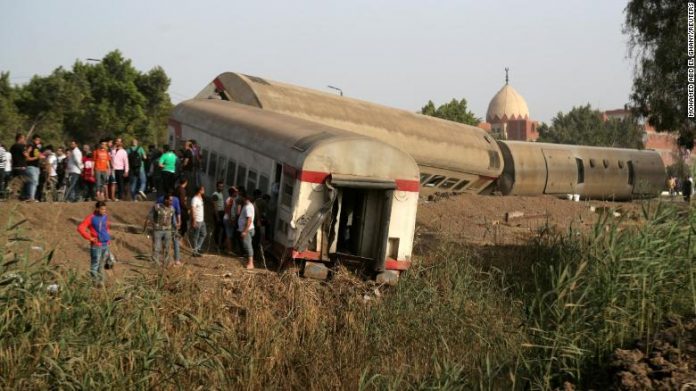 
At least 97 people were injured when a train went off the tracks near the city of Toukh, north of Cairo on Sunday, according to Egypt’s Ministry of Health.

Four train carriages derailed in Egypt’s Qalioubia province north of Cairo. Two security sources and local media reported that several people had been killed in the accident, but there was no official confirmation-Reuters reported
At least eight train wagons were derailed, the provincial governor’s office said in a statement. Videos on social media purportedly showed carriages overturned and passengers escaping to safety along the railway.


The derailing is the latest of several recent railway crashes in Egypt.
At least 20 people were killed and nearly 200 were injured in March when two trains collided near Tahta, south of Cairo.

The cause of the Sunday accident is being investigated, Egyptian National Railways said in a short statement
More than 50 ambulances took the injured to three hospitals in the province.

In February 2019 an unmanned locomotive slammed into a barrier inside Cairo’s main Ramses railway station, causing a huge explosion and a fire that killed at least 25 people. That crash prompted the then-transportation minister to resign.

Egypt’s deadliest train crash was in 2002, when over 300 people were killed after a fire broke out in an overnight train traveling from Cairo to southern Egypt.