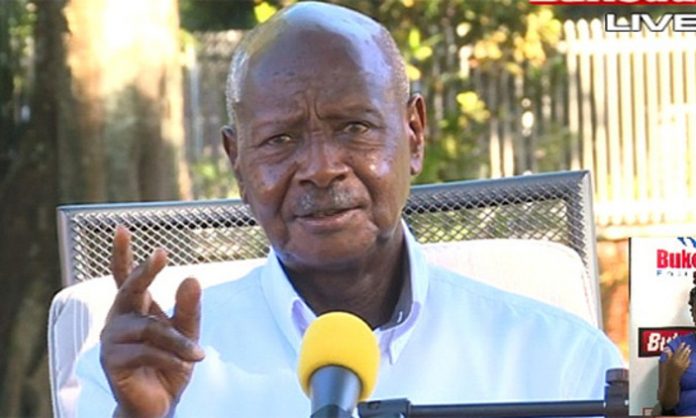 President Yoweri Museveni on Monday issued additional 16 measures in yet another wave of restrictions aimed at limiting the spread of Covid 19 cases which now stand at 33.


The President announced there will be no more vehicle movement allowed on the roads including private vehicles.
He also revealed that government is are going to discuss with Banks, electricity companies and water companies in connection with the loans and bills
Read full additional measures:

1.Measure number one is to prohibit all people to people movement by everybody including those using their private vehicles, bodabodas, tuk-tuks, etc. Why? Two reasons: (i) some private car owners have turned their cars into taxis, transporting the two people we had permitted, assuming that they would be members of one’s family, when in fact they were passengers being charged the exorbitant fare of shillings 50,000/- from Kampala to Jinja. Hence, the problem we were trying to cure of allowing the mixing of people from different sources was not being addressed. Instead, it was taking new forms. The people with private cars were now the new public transporters without licences and facilitating the dangerous mixing in the process. Secondly, even more importantly, even if the private car owners had been disciplined and only moved around with only the 2 members of their families, still that movement would be dangerous because we do not know who has the virus now and who does not, given the penetration of the imported cases into the society, short-lived though it may have been.


The ban on privately owned passenger vehicles will take effect from 2200 hours (Ten O’clock ─ Shaaha inna ez’ekiro), today, the 30th of March, 2020. I would have given the public time to adjust but on more scientific study, it was found that this would be a wrong policy. Why? A longer time would give people time to try and go to the villages. In so doing, they may transfer the sickness. We, would, then, not be curing anything. This freezing of movement will last 14 days from the 1st of April, 2020. This time it is not Fool’s Day; it is wise-person’s Day.


2.The second category of concentrations are the shopping malls, arcades, hardware shops, which gather alot of people to sell and buy non-food items. These are suspended for 14 days starting with the 1st of April, 2020.
3.All the non-food shops (stores) should also close. Only food stores, stores selling agricultural products, veterinary products, detergents and pharmaceuticals should remain open. The Ministry of Health should work out SOPs for those stores. Many people should not be allowed to congregate there and form lines to buy. Home deliveries should, instead, be encouraged.


4.The Super-markets should remain open but with clear SOPs that should restrict numbers that enter and leave the site at a given time and the handling of trolleys within the super-markets. Alot of people can be infected by handling the unsterilized trolleys within the super-markets.
5.The established Food Markets in Kampala and the other towns should continue to be open. However, two precautions must be observed. One, the distance of four metres to the front, to the left, to the right and to the rear ─ between seller and buyer and also seller and seller must be observed in all the markets. Secondly, the sellers must not go home during the 14 days. They must arrange to stay nearby for that duration. That movement between workplace to home and back, is part of the problem. How are the people you left at home and how do you move to work if there is no public transport? It is that mixing that we want to freeze ─ between home, enroute and workplace. Be in only one place for 14 days and we see what is happening.


6.Saloons, Lodges and garages should also be shut for 14 days from the 1st of April, 2020.
7.Like the farms, we would like the factories to keep producing because that is the life-blood of the country. However, the danger is in the workers going home and coming back. It is that daily movement that must be frozen. Let the factory owners arrange for the crucial employees to camp around the factory area for the 14 days. If they cannot do that, let them suspend production for 14 days.
8.Construction sites should continue if they can be able to encamp their workers for 14 days. Otherwise, they should suspend construction for the 14 days.


9.The essential services are: the medical, veterinary, telephones, door-to-door delivery, Banks, Private Security companies, cleaning services, garbage collection, fire-brigade, petrol stations, water departments and some KCCA staff should continue to operate. URA should also not close business on account of not paying taxes in these 14 days.
These employers should, however, see whether they can encamp some staff near the workplace for the 14 days, which is the preferred way, or else get a special exemption from the RDC with the concurrence of the District Medical Officer.
10.Cargo transport by train, plane, lorry, pick-up, tuku-tukus, bodaboda and bicycle, within Uganda and between Uganda and the outside, must continue but only with minimum numbers, technically needed as follows: Cargo ─ Air-craft ─ only the crew; Lorry ─ not more than 3 persons i.e. driver, tonne-boy plus one, etc., as will be directed by the Ministry of Transport, working with the National Task Force on the Corona virus.


11.Gatherings of more than 5 persons are hereby prohibited.
12.Except for cargo planes, lorries, pick-ups and trains, starting with the 31st of March, 2020, at 1900 hours (Saa Moja ya Usiku), there will be a curfew throughout the whole of Uganda. All other movements should stop. Let people stay in-doors in their homes except for the cargo-transporters. The exemption of cargo transporters does not apply to the bodabodas, tukutukus or bicycles in the curfew hours. Those should only operate during daylight hours.
13.In order to deal with some unavoidable health issues like mothers in child birth or very sick people, permission can be sought from the RDC to use private transport to take such a person to hospital. Additionally, government vehicles that do not belong to UPDF, Police, Prisons or UWA, will be pooled and deployed at the District Health Offices, including the divisions of Kampala, with their drivers, staying in tented compounds, ready to help in those health emergencies. Those vehicles will be under the command of the District Medical Officer.
14.On account of this pandemic, some sectors of the economy are suffering, such as the tourism industry, the entertainment industry, the transport industry, etc. However, as I said earlier, new opportunities are emerging in this misfortune. You have seen how the demand for sanitizers, face masks, bicycles, etc., has stimulated new industrial opportunities.


Working with the IMF and the World Bank, we shall set up a fund in UDB to accelerate industrialization through import-substitution and export promotion. You have seen how dangerous it is for Africa to excessively depend on imports from outside. This is the time to wake-up.
15.We are going to discuss with Banks, electricity companies and water companies in connection with the loans and bills, many people have with these units. It is not correct to disconnect water or electricity on account of non-payment during this time of shutdown or to seize properties on account of the non-payment of loans.
16.Government workers should also stay at home for the 14 days, except for the Army, the Police, the Health workers, the Electricity, Water and Telephone workers. Even there, however, SOPs should be worked out for the soldiers, etc., that do not stay in the barracks. This problem of not staying near the workplace is something I have never supported.


At one time, I wanted to shift and stay in Lubiri when it was still a barracks. The Army leaders, that time, pacified me by turning both Nakasero and Entebbe into barracks, including taking over Nsamizi Hill. People who do not stay in barracks, should either stay away for the duration of the shut down or camp in the barracks. The families of the soldiers and policemen should also be controlled moving in and out of the barracks should be suspended and so should the visitors. Otherwise, we can have a major outbreak in the barracks. The vehicles of the Army, Police, ambulances utilities’ vehicles, Prisons, UWA, etc., will continue to move on orders of the competent authorities.


The Government anti-Corona-virus actions of stopping public transport and other measures have put the drivers and other people out of work. Besides, many of them live hand to mouth ─ the daily bread. Without those activities, especially in the towns, such people may not be able to buy food. The Government, after properly identifying these people will distribute food to them in the form of akahuunga (maize flour), beans, powder milk, sugar, salt, etc. In the meantime, I direct the Police to arrest the opportunistic and irresponsible politicians who try to distribute food for cheap popularity. Those are very dangerous to the health of the people. When you try to distribute food or money in such a situation, people gather around you. Many people can be infected in that process. You will, therefore, have caused the sickness or death of those people. Anybody involved in that effort will be arrested and charged with attempted murder. Today, Mr. Elumelu sent me US$150,000. I will use it to buy, may be, three (3) four-wheel drive vehicles to use, by the Ministry of Health to use in this effort. Those trying to take patients to hospitals, must also stop because they spread the virus in the process. If they have money, let them contribute it to the Task Force to use in a disciplined and safe way. In Mbale, the Chinese donated to me two four-wheel drive Jeeps. I have donated these to the Task Force of the anti-corona virus.


However, the crucial point is the stopping of the epidemic. I do not want us to lose millions of our vulnerable people to this wholly avoidable epidemic just on account of indiscipline. What is the indiscipline?
Coughing or sneezing where there are other people; not washing or sanitizing your hands regularly; touching yourself in the soft parts of the body with unwashed hands, the soft parts being the eyes, the nose and the mouth; and congregating in numbers when science is telling us to avoid this wholly avoidable danger, disperse and do not congregate.


The idea, a Sheikh sent to me the verse from Isaiah, Chapter 26: Verse 20. It says: “Go home my people and lock your doors! Hide yourselves for a little while until the lord’s anger has passed”.
30th March, 2020- Nakasero